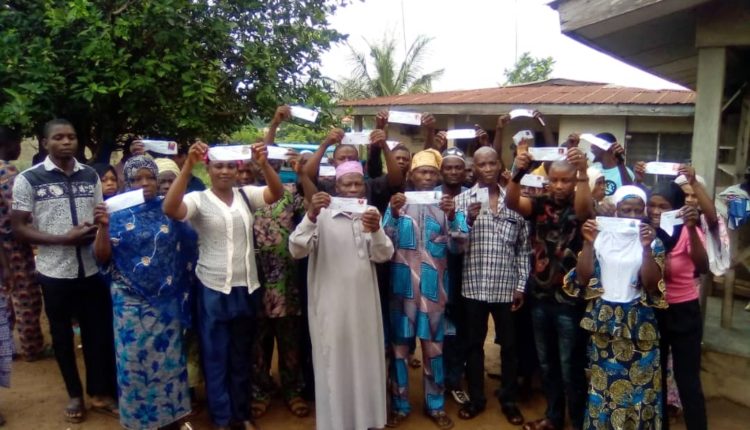 Consensus formular was on Saturday adopted by the leadership of the party as a mode of conducting the Osun State wards congresses exercise in all the wards across the state for party members to elect their representatives.

The conducts which started around 10:00 a.m simultaneously in all the wards in the nine federal constituencies of the state, saw the participants expressing their happiness on the adoption of consensus mode by the party leadership as agreed by all the party members in the state.

The exercises were conducted under free and fair atmosphere conditions as party members trooped out in hundreds for mass participations in the rancour free consensus formular of selecting their new representatives across the wards in the state.

Speaking with our reporter, the Chairman of the party in Osogbo ward 9, Hon. Adebayo Kabiru stated that, resolutions on the acceptance of consensus were passed to the leadership of the party and the lists agreed upon in all the wards in the state were forwarded to the Party Secretariat for ratifications.

“We are all now happy that, our resolutions were followed and implemented by the leadership of the party on the wards congresses day in the state and the lists were used in all collation centres in all the 332 wards of the state for affirmations.”

Findings further stressed that, all the nine federal constituencies in the state had also endorsed the adoption formular mode of conduct for the exercise.

Investigations round the state however revealed that, the exercises were crises freed ones in all the wards in the state while adequate security men were on ground to ensure orderliness.

For instance, in all the wards, heavy presence of both conventional and mobile policemen were stationed at strategic centres where the exercises took place while Civil Defence Corps and other para-military organisations including the the South West security outfit popular known as Amotekun, Vigilante Group of Nigeria and so on were also there to enforce law and order.

At Isedo ward 4, Ila Orangun names of executives were read to the hearing of the congress Committee and the same thing happened at Ward 7, Erin Osun in Irepodun local government area of the state.

In Ile- ife, the exercise went peacefully in the area visited like  Ilare ward 3, Ilare ward 4 , Iremo ward 4 and Akarabata ward as party officers were elected on consensus.

The officials of the Independent National Electoral Commission who spoke with Newsmen there, said that “the process was peaceful. There was presence of security personnel to forestall trouble makers.

In Iragbiji, the country home of the state governor, Mr. Adegboyega Oyetola, Ifelodun, Olorunda local government area of the state there were heavy presence of party members who participated in the exercise.

Specifically in Ikirun ward 4 at Holy trinity school, AUD ward 3, Oke AFO and in ward 2 at African Church secondary school oke- Amuda of the town, the exercises went on peacefully.

The same thing happened in Ede ward 5, where affirmation of the list submitted was affirmed after the party officials had agreed to the consensus form introduced to pick their representatives.

Rasheed Afolabi Olalekan, member representing the Ifelodun/Boripe/Odo-Otin Federal Constituency in the House of Representatives, on Saturday, lauded party stakeholders in the constituency on the peaceful conduct of the Congress, adding that it was a signal of unity and victory for the Party.

Afolabi, through a social media post, said: “This morning, I was in my Ward 02, Oke Amola, Ikirun, Ifelodun Local Government, where the Ward Congress of our dear Party, the All Progressive Congress (APC) was held.

“The election of the new Ward Executives was done in a peaceful atmosphere through a consensus arrangement as agreed upon by all Ward leaders and Party members in attendance, as witnesses by INEC, Nigerian Police, DSS, Civil Defence and Amotekun.

“It gladden my heart as well that reports coming from other Wards in Ifelodun-Boripe-Odo Otin local governments were of positive turnout of Party members to elect their executives peacefully through consensus arrangement.

“I congratulated all the 27 new executives of my Ward under the chairmanship of Hon. Adetoro Morufu in particular, and all the remaining 42 Wards in Ifelodun-Boripe-Odo Otin federal constituency in general. I urge them to continue to work for rhe unity and victory of the Party at all times”, Afolabi said.

Meanwhile, the Chairman Of Ward congress Committee of the All Progressive Congress in Osun State and the former Director General Of National Sports Commission, Gbenga Elegbeleye who went round the wards said, the list of the congress committee in the state is now with the delegation from the national Secretariat of the party for the ward congress in the state and we promised to work on it.

The members of the Osun State National Committee of the All Progressives Congress (APC) Ward Congress who applauded the peaceful conduct of the exercise in the entire State also, extolled members of the ruling party for their high level of compliance towards ensuring smooth, free, fair, credible and acceptable congress across the 332 wards in the State.

Addressing journalists shortly after the tour to some of the wards in the state, the Chairman of the Committee, Hon. Gbenga Elegbeleye, expressed delight at the way and manner the members of the party conducted themselves.

Elegbeleye, who supervised the Congress exercise in all the wards visited, said it was worthy of note that the entire process had been seen, observed and adjudged to be peaceful, orderly and in line with the party’s principles and guidelines.

He noted that the reports gathered so far had reflected the peaceful conduct of the members of the party as demonstrated to elect new party’s officers.

“So far so good, the Congress has been conducted in a free, fair and credible atmosphere. The wards visited so far have been very peaceful as members of the party conducted themselves in a peaceful manner to elect their new officers across the registered 332 wards in the state.

“We were able to see the members agreeing on who will oversee the affairs of the party as new executive officers in all the wards we have visited.

“Though the party agreed on consensus for the conduct of the Congress, in case there is any disagreement, then, they will vote.

Anywhere the members feel they don’t like a particular candidate, then they can vote.

“But in a situation where for instance we have about a hundred members and eighty-five of them agreed on a particular candidate and fifteen disagreed, there is nothing to vote about. One must have known that the majority have their way,” he added.

While fielding questions from journalists during the tour of the Committee to Iragbiji, the country home of the State Governor, Adegboyega Oyetola, the governor lauded the members of the party for turning out in large numbers to elect new officers of the party at wards level.

Oyetola also extolled the peaceful conduct of the exercise across the 332 wards in the state.

“Well, you have seen things for yourselves and thank God it is been very peaceful. Members of the party are here in their large numbers, just as the Congress has been done in line with the directive of the National Secretariat of the party.

“It has been peaceful all through as we all agreed to use the principle of consensus to elect those that will be overseeing the affairs of the party in their various wards.

“I am glad the way everything has been going so far. As you can see that people are very happy here in my ward. It can’t be otherwise because we had a consensus agreement across the nine federal constituencies in the State and I am glad that members of the party have been allowed to exercise their rights in this regard.

“I must appreciate those who have contributed to the success of the conduct, particularly members of the press who have been very supportive,” Oyetola added.

Earlier, the Osun Caretaker Chairman of the party, Prince Gboyega Famodun, hailed the party members for adhering to and complying with consensus mode.

According to him, the report so far across the State has indicated that the Congress has been very peaceful and orderly as it has affirmed the decision of the party to consider the consensus.