•Says only N1.2m was shared 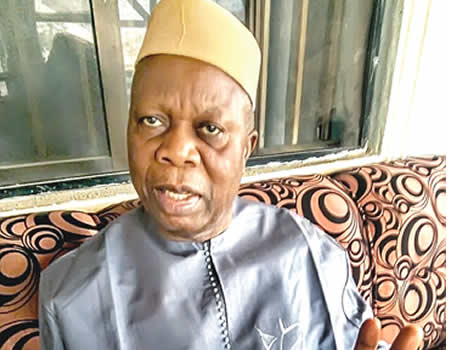 With the dust raised over the choice of Chief Olusola Oke, as the candidate of the Unity forum group of the All Progressives Congress (APC) in Ondo State, yet to settle,  the Chairman of the Seven-man screening Committee put in place by the group, Senator Yele Omogunwa, admitted receiving money from the aspirants during the screening exercise.

The Committee has been alleged of being induced during the screening which produced Oke as the Unity Forum’s consensus aspirant to face the incumbent governor,  Rotimi Akeredolu,  ahead of the APC primaries scheduled to July this year.
Speaking on the allegation, Senator Omogunwa denied collecting millions of Naira to pick Oke as the party’s concensus candidate but said the committee only shared the sum of N1.2m given to them by different aspirants in the process of carrying out their duties.
Senator Omogunwa while speaking to newsmen in Akure,  Ondo State capital, said “When we were holding meetings here, there was no water, no biscuit and we were working day and night.
“Segun Abraham came and gave us N100,000. It was in the open. Odimayo gave the committee N200,000. Another aspirant gave us N500,000. Kazeem gave us N20,000 and Adelegan gave N50,000.
“The total amount shared by the seven committee members was N1.2m. It was out of the money we booked the hotel for the Secretary for three days because he was coming from Ife.”
He, however, said Oke emerged as the Unity Forum’s choice after the Committee had an interface with the aspirants for two days while all the aspirants agreed to support whoever that is chosen.
Senator Omogunwa maintained that all the aspirants promised to abide by anybody the committee used its wisdom to select, saying the seven-man committee relocated to a church where the decision was reached to pick Chief Oke.
He revealed that some members of the Committee did not pitch their tent with Oke, disclosing that the Secretary of the Committee, Prof. Soal Ehindero specifically wanted a technocrat Governor while the only woman in the committee picked Mrs Jumoke Ajasin-Anifowose.
“All the aspirants are competent but I agreed with the majority that said Chief Oke. The Secretary left without signing. The only woman in our midst also did not sign.
“The aspirants told us to do it the way it pleased us and they will support whoever emerges.
“We followed the mind of the public. A politician should wait for his time.”