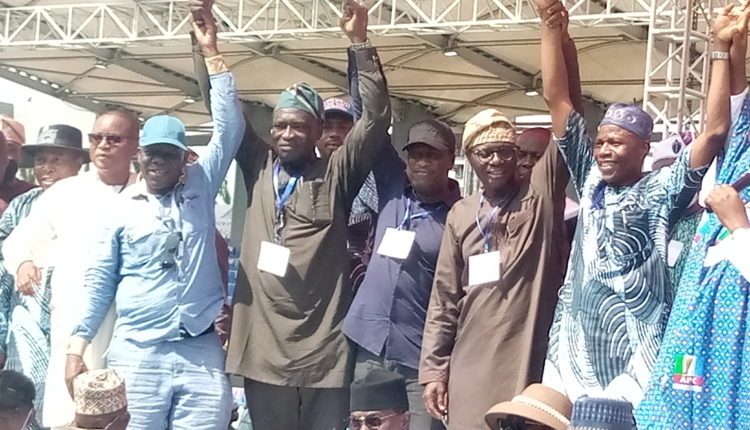 No fewer than 1615 delegates elected state officials for the Lagos State mainstream All Progressives Congress (APC) on Saturday.

Speaking on the conduct of the congress, chairman, state congress committee for Lagos State, Mr Adebayo Adelabu assured delegates and members of the party of a free and transparent process.

In his opening remark, Chairman, Lagos state congress committee from Abuja, Mr Adebayo Adelabu assured all delegates and members of the party a transparent and fair conduct of the congress.

He said, “We have been saddled with the responsibility of the conduct of the State Congress that will usher in officials for the party at the state level in the next couple of years. The Congress is yours and ours is to oversee to ensure transparency, fairness and equity and that the laid down guideline and  procedure from the National body are duly followed.

We have INEC representatives from Abuja and Lagos here present. The success of today’s Congress depend on members of the Lagos State Congress Committee and members of the party. We are impressed with what we have seen so far. Lagos state APC, you have tried to put in place adequate security and I hope we will maintain this till the end of the congress.

The choice of venue According to the guideline of the congress committee, the congress committee in consultation with the State executive of the party chose this venue and it was advertised in the dailies. We have also screened all the aspirants. We did that all through yesterday, Saturday at the state secretariat and we have published list of names of screened aspirants at the party secretariat.

We have harmonised the list of delegates from  Abuja with what we have here in Lagos and accreditation has also been carried out. The total number of delegates that are to participate in the congress is 1615. We received 37 forms for the congress. All the aspirant scre3ned are cleared and formed eligible to contest. The 35 of them are returned unopposed.

For the chairmanship position, we received two forms from two aspirants. Both aspirants were screened and one was disqualified while the other was returned unopposed.

Therefore, since we don’t have more than one contestant in each of the position, we are adopting a voice vote.

Lagos State APC spokesman, Hon Seye Oladejo was returned as the state publicity secretary with 34 others.

On his kneel on the podium praise worshipping while delivering his acceptance, Ojelabi described the peaceful conduct of the congress as manifestation of good leadership in the state.

He said, “The leaders and stakeholders are here to carry out a crucial assignment which has been peaceful and nno-violent. All that has been achieved is a manifestation of good leadership of our father and leader and a pathfinder of good politics. Please join me to appreciate our leader, Asiwaju Bola Tinubu.

We are grateful to the governor of the State, Governor Babajide Sanwo-Olu. We are committed to setting our great party on a higher pedestal. We appreciate the outgoing executive led by Hon Tunde Balogun and all delegates that have voted us. I assured all party members of our commitment to take the party to an enviable height.

During his brief remark, Governor Babajide Sanwo-Olu commended all delegates and party members and the state congress committee from Abuja for a non controversial and peaceful conduct of the congress.

He said, “I congratulate the newly elected chairman and other elected executive members of our great party. On behalf of our party, the government and the people of the State, I appreciate the good Lord for giving us a peaceful day and a non controversial State Congress.”

A faction of the party, Lagos4Lagos State congress held it’s congress simultaneously at the Lagos Airport Hotel in Ikeja, Lagos while AAMCO led by former governor of the state, Mr Akinwunmi Ambode had it’s congress at the Baptist Academy, Obanikoro, Lagos.

The congress, which was kick-started upon the arrival of the state governor, Mr Babajide Sanwo-Olu around 11am, had in attendance state congress officials and delegates from the local government areas, including past governors and deputy governor’s of the state, 20 Local Government Chairmen, 40 lawmakers, 24 House of Representatives, 3 Senators from the state, Ward delegates, former House of Representatives and former House of Assembly.

No one has monopoly of leading Nigeria — Tambuwal