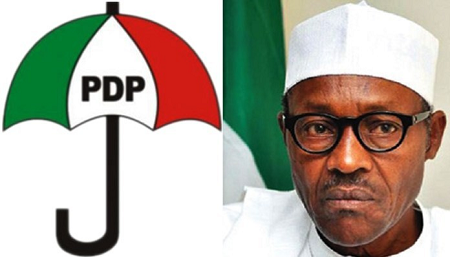 The All Progressives Congress Local Government Chairmen (APC LGC) has raised an alarm over an alleged plot by the opposition Peoples Democratic Party (PDP) to overthrow President Muhammadu Buhari with the aid of the National Assembly.

The grassroots APC chairmen made this revelation at a press conference on Thursday in Abuja, where it strongly accused the PDP of manipulating the NASS to remove the current administration from office.

Speaking on behalf of the group, National Coordinator, Adadu Alegwu revealed that the opposition has resorted to the legislative arm having failed to legitimately oust President Buhari in the Judiciary.

The recent upsurge in criminal activities across the country; from Boko Haram/ISWAP attacks to banditry and kidnappings, the group alleged, are the handiwork of the PDP, whose desperation for power isn’t strange.

However, its new-found alliance with the National Assembly, according to the APC leaders, is a cause for worry, especially after some of its disloyal members reportedly received humongous sum to betray the party.

This script, the group further revealed, is orchestrated by a top-ranking member of the PDP in the National Assembly, backed by a former president, a governor of one of the South-South state and a perpetual presidential candidate.

According to the group, having already penetrated the NASS, the PDP sought to win over the Service Chiefs to its fold.

However, their unwillingness to compromise triggered the opposition to unleash mayhem in the country.

The Forum of APC LGA Chairmen, therefore, says it considers the grand plot as a coup against democracy, and as such discerning members of the general public are placed on notice of the manifestation of the destabilization plot by the PDP.

The group further enjoined Nigerians to be steadfast and resolute in their belief in the sustenance of democracy.