•Matawalle not aware of my aspiration ― Shinkafi 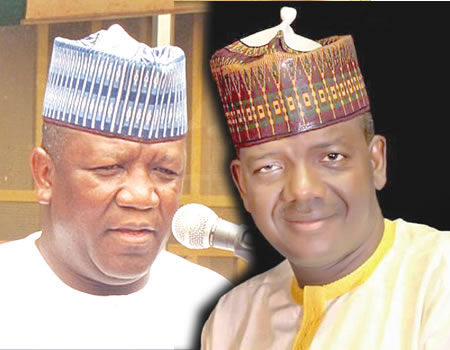 The cold war between former Zamfara State governor, Abdul Aziz Yari and the incumbent, Bello Muhammad Matawalle, has taken a new twist as the latter takes a deft move to frustrate the Chairmanship ambition of Yari.

Special Adviser on Inter-Governmental Affairs, Sani Shinkafi stormed the APC national secretariat on Wednesday to declare his intention to run for the office of National Chairman. He was accompanied by certain aides of Zamfara Governor.

The APC national convention has been scheduled for February 26.

The Zamfara state chapter is polarised into three factions. Two of the factions are run by Abdulazeez Yari and Senator Kabiru Marafa while the camp of Governor Matawalle has been accorded recognition as the authentic executive to run the state chapter in the North West state.

Addressing newsmen, Alhaji Shinkafi however denied insinuation that he is being instigated to run against former governor Abdul Aziz Yari by Governor Matawalle. He also claimed that Yari was no longer a card-carrying member of the APC.

He said: “To me, Abdulazeez Yari knows who I am. He’s one of my best friends in those days before he became governor and turned himself into a mini-god. So, I’m telling you, God will bear me witness, the very day I got a divine mission to run for this position and I have never consulted the governor. Somebody who’s very close to me and close to the governor, he is a former ambassador and former minister asked me, “Wumbai, have you contacted the governor? This one that you have started issuing statements that you want to be national chairman, are you on the same page with the governor?”

“I said no. Before I and Matawalle became friends, I have been friends with Yari. And let me put it clearly, and make a categorical statement for your record, as far as the national record of APC is concerned, in my text of press briefing, I have made more emphasis on the credible and verifiable membership register. I challenge you and I challenge everyone here to go and meet Abdulazeez Yari and ask him, let him show you his authentic and revalidated membership card as a card-carrying member of APC. As far as we are concerned, he is already automatically disqualified from this race and based on that I don’t want our State to take risk of not participating, of not taking a slot in our great party and I have decided to join the race. You can go and verify. From his ward, his name is not on the register and he doesn’t have an authentic membership card.”

The aspirant who derided godfather as a threat to the nation democracy maintained that he is purely driven by his individual conviction to contest the election.

“If elected as the national chairman of the party, I will govern the party with the fear of God.

2023 presidency: Who does the odd favour in PDP?

Ondo South senatorial seat: I am the aspirant to beat, Oyewumi says, as he submits…

Kaduna 2023: The search for El-Rufai’s successor