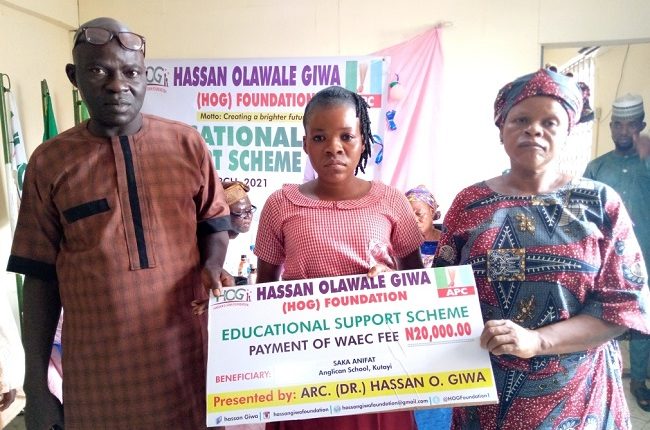 At a ceremony, on Wednesday, held at the foundation’s office in Iwo Road, Ibadan, the sum of N20,000 was presented to each benefitting student for this year’s examination expenses.

Giwa, who is a chieftain of the All Progressives Congress (APC) in the state, while presenting cheques to the beneficiaries, said the gesture was in the actualisation of one of the goals of the foundation, which is to contribute to the development of education and humanity in general.

The politician, who was represented by Mr Akeem Arowomole, stated that the focus of the HOG Foundation Educational Support Scheme is to assist the children of underprivileged people in our community who are doing well in their studies to further their educational career.

The APC chieftain said: “We are not merely giving out money; we are encouraging the students to strive to do their best, irrespective of background, to enable them to become good ambassadors of their families.

“We believe this gesture will complement whatever their parents have been doing towards giving them a good education and better tomorrow.

“Giwa charged the benefitting students to study hard and pass the examination in flying colours.”

He said that the HOG Foundation was ready to support students from the constituency who pass their examination with the Unified Tertiary Matriculation Examination (UTME) forms.

According to Giwa, the arrangement is in top gear for the distribution of free uniforms to pupils in the primary section across the constituency and vocational training programmes for youths.

“We don’t want to stop at that, we are planning another round of support for pupils in primary schools. We want to do that to make education attractive to the children of the poor and underprivileged,” he said.

Speaking on the activities of the foundation for the past 16 years, Giwa stated that the foundation had distributed over 100,000 exercise books for public primary and secondary school students, renovated several classrooms, provided furniture, paid Common Entrance fees and distributed uniforms to primary school pupils.

He called on well-meaning individuals in society to use their resources for the development of mankind.
The chairman of the APC in Lagelu Local Government Area, Mr Kehinde Adeleke, commended Giwa for always carrying the banner of the party in the local government and the constituency at large.

He appealed to the benefitting students to appreciate Giwas gesture by recording success in the examination.

Parents of the beneficiaries praised Giwa for relieving them of the burden of the SSCE expenses and wished him success in his endeavours.

Mother cries for help as gunman shoots teenager in Ekiti

Alleged link with terrorists: I have been preaching against Boko Haram for 15 years ―…