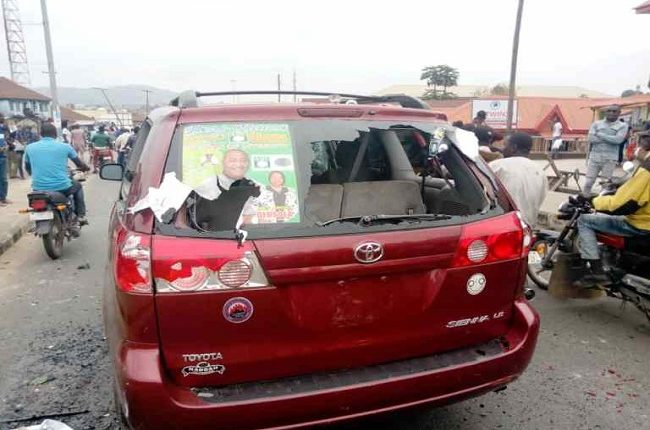 Less than 24 hours to the local government election in Ondo State, supporters of the All Progressives Congress, (APC) and the Action Democratic Congress, (ADC) on Friday, in Ondo West local government area of the state clashed, injuring and destroying property worth millions of Naira.

The fracas between the two supporters is connected with the local government elections scheduled to hold Saturday, August 22, where more than ten people were injured and about 15 vehicles destroyed.

It was learnt that there was an exchange of gunfire by the loyalists of the two parties, leading to destruction of vehicles while several people sustained injuries.

An eye witness explained that trouble started when the two groups campaigning for their candidates met at around Surulere area of the town and tried to outwit each other in their campaign, which led to open confrontation and turned to physical attack.

It took the intervention of the police from Yaba police station who were drafted to the scene to bring the situation under control.

Speaking on the clash between supporters of the APC and ADC, the Chairman of the APC in the state, Hon. Ade Adetimehin, who confirmed the incident, alleged that the supporters of ADC ignited the fracas.

He advised all politicians to embrace peace and eschew violence while he warned APC supporters to get involved in any open confrontation with any opposition party but should conduct themselves in a peaceful manner.

“We do not want bloodshed. Do not retaliate for us, politics should not be seen as a do or die affair.

“I want to advise you to always report any attack against you at the nearest police station rather than taking laws into your hands”.

The governorship candidate of the ADC, Prince Dapo Adelegan condemned the violent attacks on his members.

He expressed the party leaders concerns over the repeated attacks on electorates in the state, saying a similar attack happened in Idanre two days ago.

He stated that “We condemn in the strongest possible terms this vicious attack on electorates at this critical time in Ondo State.

“It is against humanity to deny people from expressing their rights to promote their party and preferred candidate for an office.

“This attack on Ondo State electorates, no matter which party they belong, is highly unacceptable under any circumstances.

“Therefore, I appeal to party leaders of all contesting parties in Ondo State to call their members to order and allow peace to reign.

“I also appeal to the Executive Governor Akeredolu as the Chief Security Officer of our State, to ensure the reign of peace and tranquillity at this period.”

The Africa Democratic Congress offers it deepest condolences to all the families and communities affected by these senseless acts and calls for greater effort to protect citizens and electorates for the Chairman and counsellor election process tomorrow and the upcoming Governorship election in October.

The State Police Public Relations Officer (PPRO) ASP Tee-Leo Ikoro, who confirmed the clash said many people were injured during the attack.

He said those injured have been taken to a hospital but said there was no arrest while the command had commenced an investigation into the matter to unravel the cause of the clash.

Benue Lawmaker, one other remanded in prison for alleged robbery, abduction