Poll was a mockery of democracy — Reps member 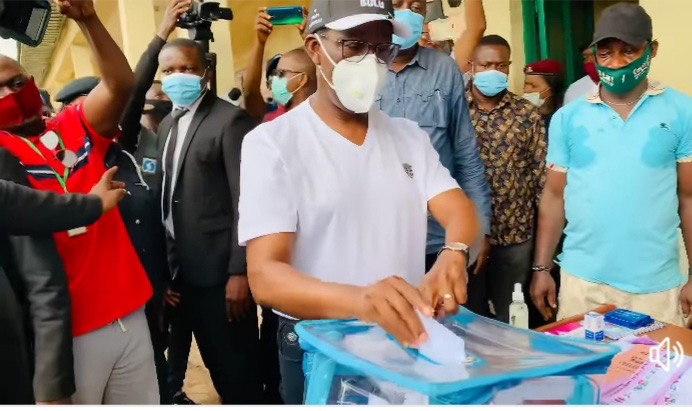 These and more were some of the reasons the leading opposition All Progressives Congress (APC) announced its withdrawal midway in the election, describing it as a sham.

This is coming in spite of assurances on Friday by Mr Arubi Orugboh, Director of Public Affairs, DSEIC, that electoral officers and election materials had been despatched to all local government areas and wards ahead of the Saturday’s poll.

At Unit 2 and 3 in Ewu Ward 1, Uvwie where voting was to take place, it was under lock and key as of 11:00a.m when the APC Vice Chairmanship Candidate, Elder Solomon Oduaran, headed there to cast his vote.

Checks by our correspondent indicated similar trend transpired at Egbewele Ward 2 in Ogbe-Ijoh and Igbilebri Ward 8, Kiagbodo in Burutu Local Government Area among others.

Cases of alleged abscondment by officials of the electoral umpire, DSIEC was reported in parts of Patani and Isoko North local government area of the state with the electorate spoiling for a showdown for being allegedly disenfranchised.

A columnist and writer, Zik Gbemre, in his outburst at the development, averted that “this confirms that there was no election in the said Unit 2 and 3 in Ewu Ward one,” adding that the situation must have been replicated “in all the places where the APC has their candidates.”

One Austine, who spoke to journalists at Kiagbodo angrily said: “I carry my PVC come outside, some of my APC members, all of us don come outside to vote for Kiagbodo but materials no even come out. Materials no dey.

“Even if them don even bribe people on top at least make dem do this thing make everybody vote make they exercise their civic responsibility but nothing. We go two wards nothing happened,” he lamented in pidgin English.

He urged DSIEC not to churn out any result from Igbilebre 2, Ward 8 in Kiagbodo and Bikorogha since there was no election there and nobody voted.

In Isoko North LGA, where electoral materials were allegedly hoarded, Mr Colinus Ugbodi an APC chairmanship candidate, lamented to journalists of the frustration of the electorate who were in high spirits to cast their votes.

“We are prepared for election today, but before now the materials have been moving since yesterday from DESIEC office Asaba, to all the local government areas.

“But all our people waiting at the DESIEC never saw their office opened. We have been waiting here since morning for us to see the genuineness of the materials to ascertain whether we are going to vote or not.

“Every material has been packaged for  every ward but they are telling us that they have the result sheets for the post of the local government chairman but they don’t have that of the counselor,” he noted.

Reacting to the allegations, Deacon Christian Otuke, PDP chairmanship candidate for Isoko North LGA, corroborated the absence of result sheets but added that officials of DSIEC could have “forgotten some sheets but they are on the way coming and we can commence the process of voting.

“When those sheets arrive, they will move from Ward to ward to fill in the results. Before they finish the voting, result sheets must have arrived,” he noted.

Speaking to journalists on the exercise, Uncle Jero Ejaieta of Ward 3 Unit 12 and 13 in Ogunu, as of 11:30a.m, described the voting exercise as devoid of observers, alleging that DSIEC did not advertise the need for observers nor followed standard procedure in selecting observers before the election.

“We normally go for observation to all the local governments in Delta State to make report and recommendation on the happenings. I’m a political observer but this year, DESIEC never called. In my own judgement, they have not done well and if I’m to score, I will score 20 per cent,” he enthused.

Meanwhile, taking advantage of vehicular restriction, most youths in their hundreds in some parts of Warri South LGA converted empty major roads to football pitches when they were supposed to be carrying out their voting rights.

Contrary to the directives given to further stem the spread of COVID-19, in few places where voting held such as Ward 8 Unit 4 and 3, Obaho, there was total disregard for social distancing and use of face masks including law enforcement agents during voting.

Meanwhile, following the alleged electoral malpractices levelled against DSIEC and the ruling PDP, the APC in the state announced its withdrawal some four hours into the exercise on Saturday.

Disclosing this in a statement on Saturday signed by the Publicity Secretary (Caretaker), APC Delta State, Sylvester Imonina Esq., the party had early warned

“some days ago that there were evil machinations to deprive Deltans of their rights to choose who to lead them at the local government level.

“True to the concerns raised by our Party days ago, DSIEC, PDP and Govr. Okowa have done the evil they know how to do best.

“Yesterday, 5th of March, 2021 at Dsiec headquarters in Asaba, Delta APC Representatives were not allowed to take statistics of the materials that Dsiec intended transporting to the different LGAs in the State.

“This is despite the insistence of the Party’s Representatives that it is the right of political parties to inspect and confirm what material is meant for ‘what and where,” he noted.

Reacting to the alleged charade of Saturday, a member representing Ughelli North/South/Udu Federal Constituency in the House of Representatives, Rt Rev. Francis Ejiroghene Waive, has said it was high time the State Houses of Assembly considered empowering governors of the 36 sates to singlehandedly select the chairmen and councillors of their local government areas in their states.

Waive said this following the outcome of the council elections conducted in Delta State, saying that it was a charade.

In a statement signed by the cleric and lawmaker on Saturday, he said: “Today 6th March, 2021 being Local Government Election Day in Delta State, voting materials and DSIEC personnel were not seen by 4:00p.m at my polling unit when the exercise ended. Yet results will be declared.”

According to him, “local government elections have become a mockery of our democracy as the ruling party in each State ‘wins’ all LGAs.

“Attempts to correct this by the National Assembly have always failed as the constitutionally required two third State Houses of Assembly never votes in support.

“The way out in my view is for the State Houses of Assembly to amend the law governing Local Governments to empower their State Governors to appoint LG Chairmen and Councilors as this will be cheaper, less rancorous and legalize the present illegality and sham called Local Government elections,” he added.