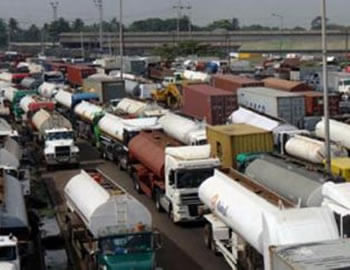 THE House of Representatives on Wednesday urged the Nigerian National Petroleum Corporation (NNPC) to immediately commence the process of relocating tank farms domiciled in the Apapa axis, Lagos state.

To this end, the House urged the Ministry of Power, Works and Housing and the Nigerian Ports Authority (NPA) to put pressure on the contractor handling the truck parked at Tin Can Island to immediately complete the abandoned project.

The House Committee on Petroleum Downstream was mandated to liaise with NNPC so as to ensure only tankers with Authority to Load (ATL) are allowed to go into Apapa.

Also, the House mandated its Committee on Ports, Harbours and Waterways to investigate the cause of the dislocation in port operations that led to the renewed gridlock and report back to the House within 3 weeks.

While moving the motion, Hon Joseph noted that the perennial traffic gridlock in Apapa had subsisted despite efforts of government to find a permanent solution to it, adding that, “those economic and vehicular activities in the corridor which is a major gateway to the Nation’s foremost seaport has been adversely affected by the menace”.

According to him, “in the first two weeks of September alone, over 2,000 trailers, trucks and oil tankers had massively flooded Ikorodu Road all through to Apapa in a bid to get into the Port and tank farms to covey commodities to their various destinations.

“In response to the recent blockage of all access roads to Apapa and the intractable traffic gridlock that resulted from it, the Lagos State Government ordered all trailers, trucks and oil tankers to stay off all the roads within the state”

The lawmaker further explained that Lagos State government has mobilized resources to ensure articulated vehicles stay away from Lagos until the traffic logjam is resolved while the representative of Apapa Constituency 1 in the State Assembly, Mrs Mojisola Miranda had also raised concerns about the problem.

The breakdown of operations at Apapa port, he added was touted as the cause of the gridlock which extended from Apapa to Ojuelegba with its attendant dislocation of economic activities.

He then expressed worry that if something urgent is not done, port activities would be in jeopardy and revenue to the nation’s coffers would dwindle astronomically.

The motion scaled through when it was put to voice vote by the Speaker, Honourable Yakubu Dogara.