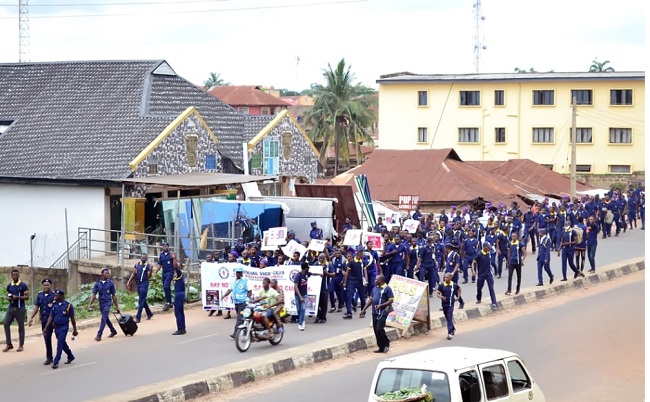 Anti Social Vices Club of the Royal Ambassadors of Nigeria, at the weekend, in Oyo town, Oyo State, joined the rest of the world in a protest rally against the cases of rape and cultism across the country.

It also noted that cultism would eventually result in frustration and abortion of life ambitions, self-destruction and untimely death.

Speaking at the rally, Marshal, Royal Ambassadors of Nigeria, Counselor Ayo Adekunle, said the rally was motivated by a passion to draw the eye of the public to the increasing cases of rape and cultism in our society.

He therefore called on the government to enact a legislation that would make rape a punishable act.

Adekunle said: “Our motivation is simply that we want the society to be free of such vices as cultism and rape. We want woman’s right to also be regarded as human rights. We want to see that an average woman can move freely in the society without being harassed and without being raped.”

Also speaking on the occasion, the National Coordinator, Anti Social Vices Club, Mr John Taiwo, said, “what we are saying is that rape and cultism should not be allowed to fester in our society, and that promoted us to stage this rally. We say ‘NO’ to the evil vices. Women deserve societal and governmental protection.”

The All Progressives Congress (APC) has told a Federal High Court in Abuja, that the Comrade Adams Oshiomhole-led National Working Committee (NWC) was sacked to solve the internal leadership crises rocking the party….Anti-social vices    Anti-social vices

The party also said that immediately the Caretaker/Extraordinary Convention Planning Committee was put in place after the NWC’s dissolution, the crises that had characterised its affairs were laid to rest….Anti-social vices  Anti-social vices

The Emir of Zazzau, in Kaduna State, Alhaji Shehu Idris has died in his palace at the age of 84…Anti-social vices

His son, Aminu Shehu Idris, confirmed in an interview with the Tribune Online that his late father who was appointed on 15th February, 1975 and spent 45 years in the throne died on Sunday after a protracted illness….Anti-social vices  Anti-social vices

When will agitations end?