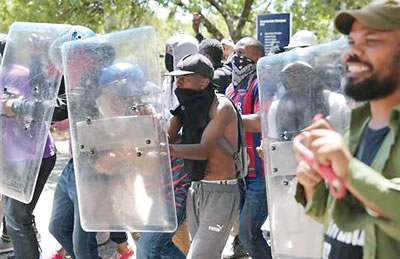 The presidency called for calm, however, the newspaper Times Live reported that a student caught between police and protesters was injured.

Before the interventions, hundreds of demonstrators had been locked in a stand-off with migrants, both sides armed with rocks and sticks, broadcaster eNCA reported.

The rally followed the reported looting of dozens of foreign-owned shops in Pretoria earlier this week.

More than 130 people were arrested within 24 hours, police representative Khomotso Phlahlane said in a press conference broadcast live by eNCA.

Tensions between migrants and locals have been reported in several communities, the presidency said in a statement, calling for restraint.

“It is wrong to brandish all non-nationals as drug dealers or human traffickers. Let us isolate those who commit such crimes and work with government to have them arrested, without stereotyping and causing harm to innocent people,” the statement quoted President Jacob Zuma as saying.

South Africa, which has an unemployment rate of about 25 per cent, has seen sporadic violence against migrants from other African countries, who are accused of taking jobs.

The regional superpower had about 2.4 million migrants in 2013, the largest number in southern Africa, according to the International Organisation for Migration.

She accuses me of infidelity, smells my pants —Wife

Steps Buhari, NASS must take to save Nigeria —Anyaoku, Soyinka, Sultan others