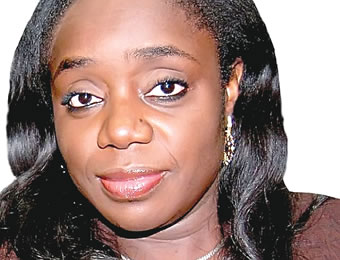 Staff of the Federal Ministry of Finance (FMF) including Office of Accountant General of the Federation and Ministry of Budget and National Planning on Monday protested against alleged high handedness and insensitivity of their minister, Kemi Adeosun.

But a press release by Director of Press for FMF, Salisu Na’inna Dambatta, dismissed the protest as lacking any justifiable ground.

The staff who locked themselves inside the ministry, disallowing further movement in and out of the ministry said they locked the gates so that policemen and miscreants would not gain entry into the premises.

Although none of them was ready to speak officially as union leaders spotted wearing t-shirts with logos insisted they did not have authorisation to speak with the press, they carried placards bearing various inscriptions and continued to sing solidarity songs even as rain fell heavily.

Some of the placards read “Enough of intimidation and harassment of staff,” Kemi Adeosun’s exit as Minister of Finance will end intimidation of staff with police.”

Some staff who agreed to speak anonymously said since her arrival, the Minister has refused to approve the annual allowances like overtime and bonus that they had collected for over 20 years since the time of late General Sani Abacha.

“The real problem is the way she speaks with union leaders,” one staff said, alleging that Adeosun claims that she was a Minister of the Federal Republic and not just that of finance. And when the union tried to pressure her, the minister was alleged to have reported to verbal insults and curses.

According to Dambatta, “The payment of what the protesting staff called a Special Overtime (SOT), was stopped by the last administration in 2014 on the ground that it was not listed in any extant government Circular, Financial Regulations or the Public Service Rules.

“The sum of N1.2 billion computed by the staff union for payment could not have been budgeted for in 2016 in the first place, not only because of the paucity of funds, but also the fact that the SOT allowance was not part of the remuneration in the Federal Public Service.

“The Federal Ministry of Finance, the Office of the Accountant-General of the Federation and the Budget Office of the Ministry of Budget and National Planning, do not individually or collectively, owe any of their personnel their salaries.”

The statement then declared that “In view of the foregone, the management of the Federal Ministry of Finance wishes to categorically state that the protests have no justifiable grounds.”