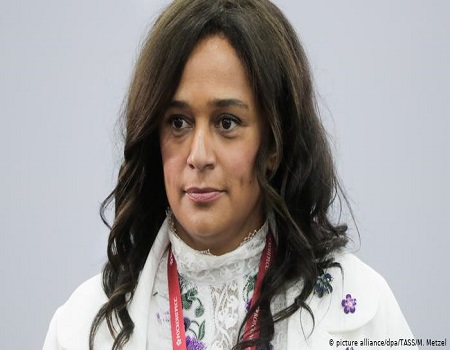 Angola could issue an international arrest warrant for billionaire Isabel dos Santos if she fails to cooperate with a fraud investigation in which she has been named as a suspect, its chief prosecutor was quoted as saying.

Angola has named dos Santos, the daughter of former President Jose Eduardo dos Santos, as a suspect over alleged mismanagement and misappropriation of funds while she was chairwoman of state oil firm Sonangol in 2016 to 2017.

“At this moment, the concern is to notify (the suspects) and assure that they voluntarily come to face justice,” Helder Gros said in Luanda late on Wednesday, according to Portugal’s Lusa news agency.

Failing that, his office would resort to legal instruments at its disposal, one being an international warrant.

Angolan news agency Angop also said the prosecutor, who travelled to Lisbon on Thursday, had spoken of the possibility of such a warrant.

Isabel dos Santos, who amassed her fortune during her father’s decades-long presidency, denies wrongdoing and has said allegations against her are politically motivated.

She could not be immediately reached on Thursday for further comment.

Eurobic, a small Portuguese bank in which she has owned a large stake, said on Thursday she had decided to sell the stake.

He said upon arrival he would seek help from the Portuguese prosecutor’s office “on many matters”, but would not comment specifically on the dos Santos case.

On Sunday, hundreds of thousands of files about dos Santos that were obtained by the International Consortium of Investigative Journalists were released by several news organisations.

The media reports focused on alleged financial schemes used by dos Santos to build her business empire, including transfers between Angola and Dubai.

Dos Santos, who has been living abroad, said on Sunday that allegations made against her were “completely unfounded”.