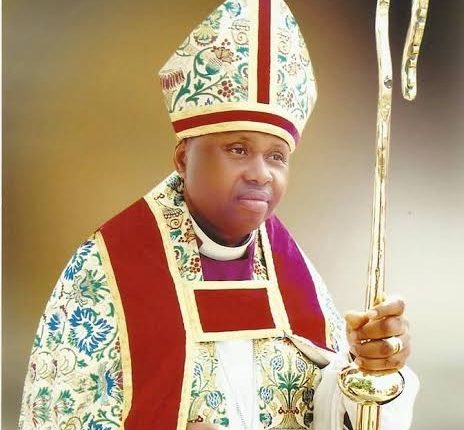 The Archbishop, Province of the Niger and Bishop of Awka Anglican Diocese, Most Rev Alexander Chibuzo Ibezim, has blamed the deteriorating lifestyle among youths on their activities on the social media network.

According to him, social media has had a more negative impact on the life of Nigerian youths, especially young girls in the society who he said to engage in various negative activities to the detriment of their moral life.

Archbishop Ibezim stated this, on Sunday, during the 2021 Mothering Sunday special service at the Cathedral Church of St. Faith, Awka, calling on mothers to seek a spiritual solution by praying for the young generation of children.

Delivering his sermon on the theme ” the name of the Lord is a strong tower,” as found in Proverbs 18 verse 10, Archbishop Ibezim urged mothers not to relent in training their children who he said are the future of every family. He further said that mothering Sunday is a great day and is done to promote the kingdom of God.

He advised mothers to monitor the movement of their children through prayers disclosing that most mothers do not know the whereabouts and activities of their children, especially in social media. He said the young people have gone out of hand because the advent of telecommunication gadgets are alien to most parents.

He said most girls connect to so many bad friends through social media including dating men outside the country only to portray Godly life to their parents to deceive them, urging parent to embrace prayers as the only remedy to salvage the generation in the technology-driven world.

The Archbishop who also preached from Isaiah 41verse10 decried that most women are easily swallowed by fear due to factors relating to family problems forgetting that God is by their side. He advised mothers to shun marital fear and encouraged them to draw closer to God as “He is ever-present to save those who believe in Him.”

He urged Mothers to understand their roles in the family saying that some women in the family mislead their husbands into involving themselves in wrongful acts reminiscent of Safira and Ananias in the bible.

He charged Mothers to stand by God in times of challenges and advised them to understand that God does not disappoint in any situation. He urged widows among mothers to hope in God for He is a great comforter and provider assuring that whatever that is of a burden to mothers is a burden to God.

Addressing the Mothers, the President Mothers Union, Women’s Guild and Girls Guild, Diocese of Awka and Province of the Niger, Mrs Martha Chioma Ibezim urged mothers to trust and look unto God irrespective of their challenges stressing that mothers are role models that the society and the younger generation look up to.

Mrs Ibezim who recalled that mothering Sunday is a testimony of God’s goodness to mothers globally having survived the dreaded COVID-19 pandemic, however, stressed that even in the midst of the greatest challenges of Mankind, the safety of Christians remains in the name of the Lord.

She urged mothers to live a life of honour and prestige, she encouraged them to work hard to make sure that their children and family are equipped with knowledge, skills and abilities to make it as a competent being reflection of Heaven on earth.

She noted that the greatest needs among families today is security but assured that such could be obtained in God and further enjoined Christians to accept God’s divine assurance of protection as activated in a lifetime with Jesus Christ.

Also speaking on the significance of the day, the Special Adviser to the State Governor, Willie Obiano, on Traditional medicine and Managing Director, Anambra State Oxygen Production Plant Dr OnyekaChukwu Ibezim said that mothers are critical part of everything in life stating that “without mother efforts of organizations, government and even Church is bound to fail.”

He reminded that the world is in a precarious situation due to the cOVID -19 pandemic. He stated that the Anambra State government has recently flagged off the COVID-19 vaccine urging people to cooperate with the government in its fight to make the environment COVID-19-free.