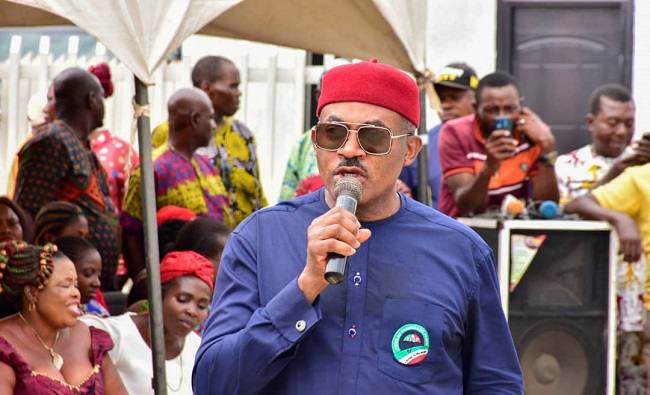 One of the aspirants of the People Democratic Party (PDP) in the slated November 6, 2021 governorship election in Anambra State, Dr Godwin Maduka, has said he would ensure that Anambra emerged as the first state in Nigeria to manufacture mobile phones if given the opportunity to govern the state.

Dr Maduka who made the promise on Sunday, at the thanksgiving service held at St John’s Anglican Church, Eziowelle, in Idemili North Local Government Area of the State to cap the 3rd session of the 31st Synod of the Diocese on the Niger, explained that the production of the cellphones would boost the state and the nation’s economy.

According to him, there was an urgent need to develop the digital economy to generate employment opportunities for teeming youths in the sector, adding that under his watch as governor, the state would also establish Health Emergency Room in all the 21 Local Government Areas.

He noted that if elected into office, he would use his contacts and connections in western nations to attract and partner investors in the sector which seemed to have not been fully explored for the economic sustainability of youths.

“The challenges we face as a state does not discriminate, insecurity, poor health facilities, unemployment, low education standard and the rest do not know who is a Catholic and who is an Anglican, So, what’s the need,” he said.

He explained that he decided to join the governorship race because of his transformational plans for his home state, Anambra.

He also added that he is eager to replicate the Dubai he brought to the Umuchukwu community on a larger scale in Anambra State.

Earlier, in his sermon, the Guest Speaker, Rt Rev Stephen Akobe, Bishop, Anglican Diocese of Kabba, spoke on the need for Christians to be doers of the word of God and not hearers only.

President of the Synod and Bishop, Anglican Diocese on the Niger, Rt Revd Dr Owen Nwokolo, appreciated all that supported and attended the Synod and prayed for God’s intervention in the affairs of Nigeria, as a nation.

Bread sells for N550 in Abuja as bakers implement 30% increment