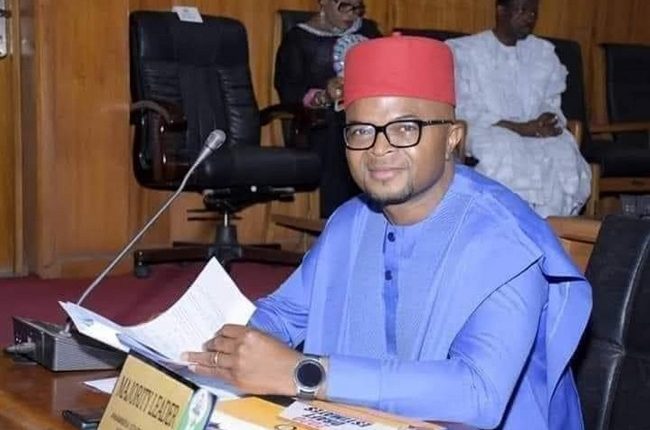 Share
The Anambra State House of Assembly Speaker, Honourable Uche Okafor, has confirmed the death of Hon. Nnamdi Okafor, who was said to have slumped and died in South Africa.
Tribune Online gathered that Hon. Okafor, who represents Awka South State constituency 1, under the All Progressive Grand Alliance (APGA) platform,  is also the majority leader of the State Assembly.
He reportedly slumped in a hotel in South Africa, where he is holidaying.
A source, who announced the death in a political WhatsApp group, said “The Majority Leader of Anambra State House Of Assembly and Member representing Awka South Constituency 1, Hon. Nnamdi Okafor, collapsed in the early hours of Wednesday, in a Hotel at Sandton City Johannesburg, South Africa and was confirmed dead hours later.”
Most members of the Anambra State House of Assembly have been in South Africa on holiday for close to a month since the Assembly went on recess.
Reacting to the death via a press statement made available to Newsmen in Awka, on Wednesday, by his Chief Press Secretary, Emma Madu, the Speaker of the State Assembly, Rt.Hon.Uche Okafor said that the news of the death of Hon. Nnamdi Okafor came to them as a rude shock.
Okafor described the death of the Majority Leader of the House as a great loss to the Legislative Institution in the State, Awka Community and the State at large, adding that the late Hon. Okafor was a knowledgeable and active legislator whose contributions both in the legislature and in his constituency distinguished him among his contemporaries.
The Speaker maintained that the State House of Assembly has lost a great, erudite and eloquent lawmaker in the person of Hon. Nnamdi Okafor, noting that the deceased lawmaker’s short but eventful life and times are worthy of emulation.
”On behalf of the State Lawmakers and the entire legislature, commiserated with his wife and the family and prayed to God to grant the soul of Hon. Okafor eternal repose,” the Speaker added.

Four conversations you should never have with your boss