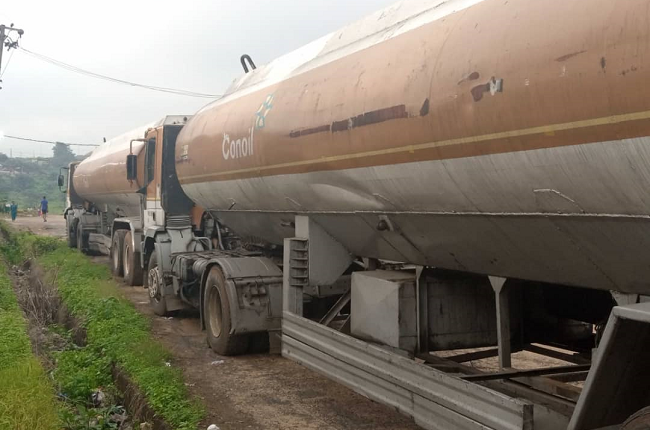 The State Commandant, Mr Everestus Obiyo, while addressing journalists in Awka, on Tuesday, said that the suspects were arrested following a tipoff.

According to him, “the Anti- Vandalism Squad of the Command, headed by ACC Dennis Reuben, on the 23rd of September, 2021 at about 2200hrs, acting on a tip-off intercepted and arrested four suspects with two trucks loaded with 45, 000 litres each of Low Pour Fuel Oil otherwise known as black oil at Onitsha Owerri Road Ihiala, in Ihiala LGA of the state.”

“Preliminary Investigation Indicates that the suspects are not licensed to deal in petroleum products, while the trucks do not have the permit to be used for conveying the commodities.

“All the suspects admitted and confessed to the various criminal roles they played in the Commission of the crime. The investigation is in progress, after which they will be arraigned in court on completion of the investigation.

He assured of more commitment poised to rid the nation of illegal dealing in Petroleum Products which, he stressed, had so far affected the Nigerian economy negatively.

In spite of the huge investment in the water sector by the government and international organisations, water scarcity has grown to become a perennial nightmare for residents of Abeokuta, the Ogun State capital. This report x-rays the lives and experiences of residents in getting clean, potable and affordable water amidst the surge of COVID-19 cases in the state…Anambra NSCDC intercepts  Anambra NSCDC intercepts