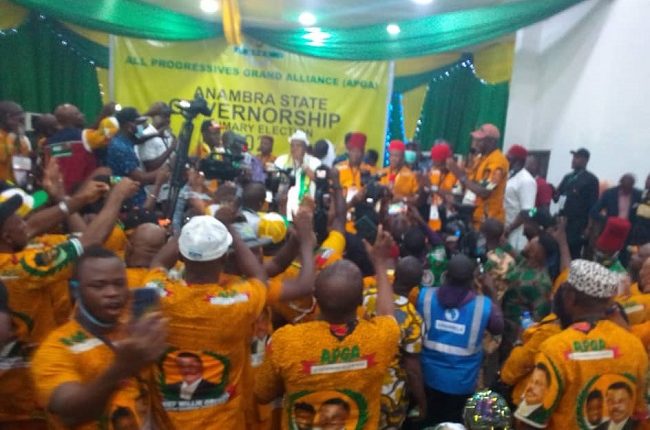 Ahead of the November 6, 2021 governorship election in Anambra State, the All Progressive Grand Alliance (APGA), has declared the former Central Bank of Nigeria (CBN), Governor, Professor Charles Chukwuma Soludo, as the winner of the party’s primary.

Soludo, who is from Anambra South Senatorial District, emerged as the governorship candidate with 740 votes.

He was followed by Honourable Okwudili Ezenwankwo, who polled a distant 41 votes.

The total delegates for the primary were 812, accredited delegates, 795, while the total vote cast is 792.

Chairman of the electoral panel and Vice-Chairman South-West, Deacon Sampson Olarere, commended the resilience of the aspirants saying each one of them was capable of winning the November 6, general election but was only necessary that the best be chosen.

In their separate speeches, the convener of Youth Earnestly for Soludo, Dr Obinna Omenugha, the Transition Committee Chairman of Orumba North Local Government Area, Lady Ify Obinabo and Chief Jude Emecheta, commended the transparency and credibility of the process.

They appealed to Soludo co-contesters to work with the party to win the Nov. 6 general election.

The state governor, Willie Obiano, who witnessed the exercise along Senator Victor Umeh, that lasted for 11 hours amidst tight security with the presence of Army DSS, Civil Defence Corps, the Police and the state Vigilante group, said he had always wished to hand over power to a successor from the South in the spirit of equity and fairness, and urged the candidate and the party to work as a team and deliver Anambra for APGA come November 6, 2021.

“As the National leader of APGA, I will ensure the party wins 21 over 21 in the election.

In his acceptance, Prof. Soludo promised to deployed his economic experience to the state.

While thanking the INEC official led by Mr Musa Husunu, the security agencies, he called for a peaceful election.

In spite of the huge investment in the water sector by the government and international organisations, water scarcity has grown to become a perennial nightmare for residents of Abeokuta, the Ogun State capital. This report x-rays the lives and experiences of residents in getting clean, potable and affordable water amidst the surge of COVID-19 cases in the state…APGA declares Soludo  APGA declares Soludo

The Lagos-Ibadan railway was inaugurated recently for a full paid operation by the Nigerian Railway Corporation after about a year of free test-run. Our reporter joined the train to and fro Lagos from Ibadan and tells his experience in this report…APGA declares Soludo  APGA declares Soludo