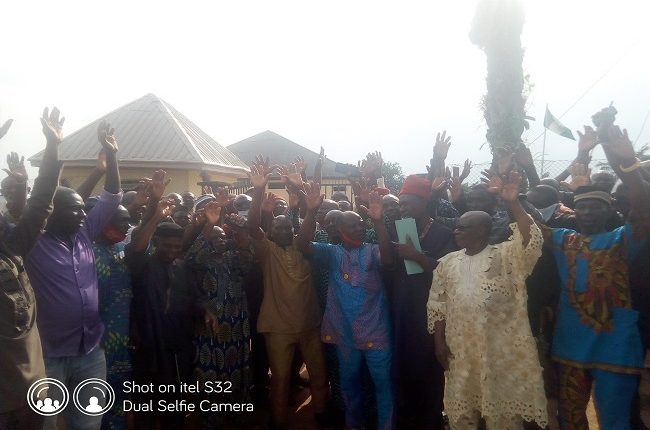 The Agbaja-Abatete community in the Idemili North Local Government Area of Anambra State, yesterday, protested at the Ogidi Area Police Command Ogidi, over alleged police harassment, Intimidation by officers from the Command during a community meeting.

The protesters, mostly elderly men numbering about 300 displaying voice placards with their hands up, saying; Police, don’t allow politicians to use you in Agbaja-Abatete community, Igwe Abatete, Engr. Emeka Efobi Edeogu, don’t set our community on fire, Mr Paul Okafor, stop parading yourself as a caretaker Chairman, you are not a member of Agbaja Abatete Community Association (AACA), yet in Agbaja village, Governor Obiano, wake up, come to our aid some politicians are working for your downfall in the area, among other allegations.

They appealed to the Inspector General of Police (IGP), Mr Mohammed Adamu and the State Commissioner of Police, Mr John Abang, to call officials of the Area Command to order.

During the protest, they accused the traditional prime minister (Onowu/Obi) of the community who is oversea of trying to cause a crisis in the community by allegedly imposing one Paul Okafor as the Caretaker Committee chairman of the community unconstitutionally.

The leader of the protesters and the Outgoing President of Agbaja Abatete Community Association (AACA) Prof Ikechukwu Okudo while addressing newsmen at the Command premises called on the police to arrest his people and should call those threatening their peace to desist.

“On September 27, 2020, we convened a general meeting of AACA but we were disallowed, vigilante man who came to stop us said that he was directed by Igwe Abatete who is also abroad to stop our meeting. So some of us left the venue and one of those who came later to the place Chief Basil Mbanefo was arrested by police and was brought to the Area Command Ogidi, we came and bail him. The police brought petition by the Caretaker Committee, saying that they will arrest more ten people in the community and that is why we came en masse for the protest.

“We are not violent and they have no reason from stopping us from holding our meetings since we are peaceful and law-abiding citizens.

“But when we came to this place,  Area Commander invited few of us for a peace meeting where we told him that Caretaker Committee is unconstitutional and the people that instituted them and sworn them in are not part of AACA. But the Area Commander told us to go and come back next week Tuesday for other parties in the matter to be at the meeting.

“I have been the President of AACA for the past three years our tenure is due and we wanted to hold our election but COVID-19 stopped us. We convened a meeting on July 5 where the association extended my tenure for one month that is till August 2 to conduct the election. So, when August 2 came it was bound on us that we could not conduct election because government placed a ban on gathering due to CoVID-19 but gathered at the venue since we could not hold the election to either fix another date or extend our tenure but the police came and dispersed us from the place.

“After that day, the traditional prime minister Chief Pius Ezeigwe claimed that he had dissolved my leadership and singlehandedly constituted a Caretaker committee for the community without following due process and against our constitution by appointing one Paul Okafor who is not even qualified. His age-grade graduated last December and our constitution says that when you graduate you will stay one year when you will be taxable and become a member of AACA. In fact by January next year, he will become a member of the Association that he has been imposed on us as our president.

Prof. Okodu, also appeal to the police and other security agencies in the state to always investigate thoroughly whenever there is gathering to avoid indiscriminate arrest, tortured and prosecution.

But the Secretary of the Caretaker Committee Mr Cyril Iroegbunam and other members of the committee, when approached by newsmen for reaction over the matter, said: “We are not disposed of for any reaction, thank you”.

Also, the traditional prime minister of the community Chief Ezeigwe who is abroad when contacted for reaction referred the reporter to the President General of the Town Mr Moses Chukwuka but he did not take the calls put across on his phone.

When contacted, SP Haruna Mohammed, police public relations officer in the state on the allegation, he said that investigation is still ongoing.