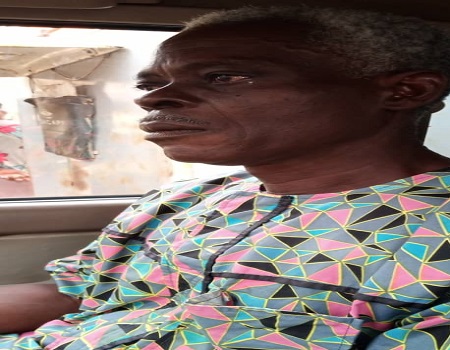 A 75-year-old man, Mr Reuben Onwuegbunem from Orebe village, Amansea in Awka North Local government area of Anambra state has called on security agents and Anambra State Government to come to his rescue after few elements allegedly connived and banished him and his family from the community.

The father of six who was visibly crying while narrating his ordeal said his son was attacked by two claiming to be local vigilante in the village for reasons yet unknown to him.

“Ukwa and Friday security personnel came to my house in the evening and started fighting my son who was outside urinating after they flashed him torchlight, I rushed out to ask them what was the problem they started beating me too.”

According to him, the security men immediately rang the village bell leading to other youths coming out to join in beating and dragging him on the floor.

“They started beating me, my son and my wife. They destroyed all the property in my house, my two motorcycles and other valuables saying that I have been disobeying the rules in the community.”

Mr Onwuegbunem, therefore, appealed to government and security agents to urgently come to his aid by visiting the community to ascertain the true situation of the matter that must have informed their decision in him and his family.

“I have reported the matter three different times to police. Our President General is aware but, I am sure they consulted him before coming to destroy my house and he aligned with them for reasons I don’t know.

“The only crime I committed is because I asked them to leave my land inheritance for me as the only surviving son of my father.”

His wife Mrs Ngozi Onwuegbunem recalled that life had been very unbearable for her and her children since she ran to her father’s village for safety.

ALSO READ: What young women should know to grow their influence on social media — Ashmusy

“I went to process garri in my husband’s village, some youth came there and said that they don’t want to see me there again, I was confused as I parked my cassava and ran back to my father’s house.”

In an interview, a community leader in the area, Chief Cosmos Okonkwor from Umuokpala village, Amansea, who expressed worry over the development called for peaceful resolution of the matter as it was beginning to impede on the development of the area.

“Honestly, this thing is strange to me, I have tried to call on the Orebe chairman of the village and others to come together and settle this matter to no avail. Whatever government will do please let them come and do it fast for the safety of lives and property.”

Also in an interview, the Chairman of Orebe village, Mr Okechukwu Nwafor-Iga, said the village had certain rules and regulations which had always been violated by Mr Onwuegbunem and his family members.

“The rules and regulations in my village were set even by the same man who has been violating them, all we want is peace and progress in our town. We can’t support evil at all. How can one person at all times be having issues with the entire village? It’s unfair, he is an adult but not doing what is right.”

Mr Nwafor Iga explained that the village had a strong law against the selling of Indian hemp and smoking it in public, but alleged that Mr Onwuegbunem and his family refused to respect the communal order.

Another resident of Orebe village, Amansea, Mrs Charity Arinze, narrated how the said man had been fighting security men and disrespecting constituted authorities by continuing in the selling of drugs and indulging in diabolic activities.

“That man is evil. He wanted to kill two security men just because they asked him and his son, Rapuluchukwu, to stop selling and smoking hemp openly.”

A former Chairman of the village, Mr Ejike Onyekwere and a youth leader Mr Chukwuonso Okafor said, “We heard the voice of a security man screaming inside our brother’s house, so we rushed to rescue them. That was when the youths tried to force the door open and we saw charms and pictures of different people pinned on them with bloodstains before we could search the house, Mr Onwuegbunem and his family had abandoned the security men on the floor and ran away.

“The village did not banish them as he is claiming, rather he is running away from all he had committed against his people. If he comes back today and shows remorse, we will accept him but on the condition that he will abide by the rules of our village which was made for a peaceful coexistence of all of us.”

When contacted to confirm that the matter has been reported three times to the police as well as the extent to which police have waded into the matter, the Police Public Relations Officer of the Anambra state command SP Haruna Mohammed did not respond to several phone calls as at the time of filing this report.