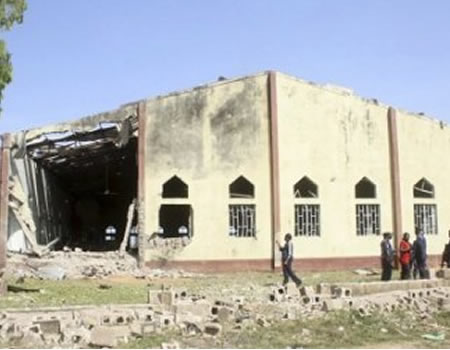 It was gathered that Chiadi’s action generated controversy in the community which saw the act as an abomination.

A source who spoke with the newsmen in a condition of anonymity said: “As if this was not enough, he wedded her
in a church at their Agba Village, Ekwulobia.

“In an apparent reaction to the unusual wedding, Agba Village youths who saw the marriage as an abomination set ablaze the church where the wedlock took place.”

ALSO READ: She’s promiscuous, stopped sleeping at home —Man •He caused it by introducing me to Facebook, WhatsApp —Wife

It was gathered that the wedding was conducted by Chiadi’s elder brother, Mr Chijioke Ezeibekwe, a priest of Dwelling Fullness of God Church, Agba,” who was said to have cited Scriptures to back his action.

However, a member of the Church, Daniel Ezeobi, disagreed that the Bible authorised such marriage.

Citing Leviticus 18:9 of the Bible, which he said was clearly against incest, Ezeobi described the marriage as an abomination.

Ezeobi said the eldest brother of Chiadi, Emeka, was the person who reported the “incestuous act” to the kindred head, who summoned the family to an emergency meeting and mobilised the youths against marriage.

Addressing journalists, the father of the “bride and bridegroom,” whose name was given as “Luisco,” said  his concern was a way out of the situation, since according to him, “what has happened, has happened,” while their mother claimed that his son’s action was biblical, adding “My son paid the dowry as required.”

A member of the community who spoke on condition of anonymity described the couple as new converts of the church.

He said: “Since they were baptized into the church, about two years ago, they have engaged in weird and rebellious behaviour as well as false teachings.

“Because of their rebellious attitude and false teachings, we have since ostracised them.”

Preparing for 2019: Let’s not forget hardship brought upon us