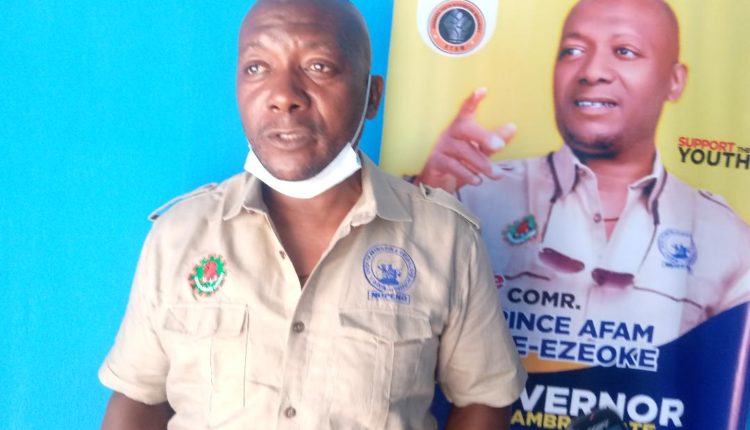 The ADP Chairman who declared that the event marked the flag off the ADP campaign ahead of the Saturday election, hinted that the scary security situation in the Southeast state informed the party adoption of interpersonal contacts and door-to-door campaign.

Engineer Sani further claimed that the strategy has been useful.

He said: “This occasion of the flag-off of the campaign of the ADP standard-bearer, Comrade Afam Douglas Ume-Ezeoke in the 6th of November, 2021 gubernatorial election in Anambra state, is to us in the ADP a formality that is, best regarded as the Consolidation of the party’s campaign and mobilization in the historic contest. In other words, barely six days to the D-Day, our party could not have been flagging off its campaign at this eleventh hour without cogent reasons.

“In the wake of the unfortunate atmosphere of insecurity which has disrupted the normal conduct of social and economic activities in Anambra and most other states in the Southeast of the country, the ADP very early in the day, embarked on a campaign strategy which has proved very effective and without endangering the safety and security of our members, our teeming supporters and the general public. Our strategy, fashioned and spearheaded by the party’s flag bearer and his team, is the resort to the painstaking option of interpersonal contacts and door to door campaign.

“We thank and commend Comrade Ezeoke for bringing up this ingenious strategy which has resulted in giving the ADP several leaps ahead of the other political parties in the race to the Government House, Awka. Through that unique mode of the campaign, tens of thousands of Anambra People have registered with us and are now card-carrying and financial members of the ADP. A greater multitude of the electorate has been mobilized and convinced to buy into the philosophy and programmes of our great party as well as believing in our candidate as the most credible alternative to the shambolic chain of leaderships that have held down the progress and prosperity of the state all these years.”

The ADP Chairman described his party candidate as the best alternative to the incumbent All Progressives Grand Alliance but cautioned Comrade Ume Ezeoke to deliver on his manifesto if given the mandate.

“Your Excellency, Comrade Afam Douglas, I say Your Excellency because you are clearly the Governor-in-waiting to take over the mantle of leadership in Awka in a few months from now. You have fought a gallant war through a grueling campaign that you have undertaken. And from the look of every index, God Almighty, the giver of power, in His infinite wisdom and mercies, has decided to crown your efforts with success. I just need to tell you that to whom much is given, much is expected. “As you are poised to take over the mantle of leadership, you should be mindful of your electoral promises to the people that have earned you, their confidence. There is a silent, but the yet powerful sacred pact between you and the people that you must always remember and strive to fulfill when victory is won.

“The ADP has promised through you, to provide good and transparent government; you have pledged free and qualitative education; severally, you have assured the people of Anambra State that under you, the era of multiple taxations will become a thing of the past; just as you have given your word that an ADP administration will frontally address the perennial crises of a poor and delayed payment of salaries and wages of all public workers; in your manifestoes and assurances given in the course of your interpersonal and door-to-door campaigns, is the undertaking to radically redress the deficits in health-care delivery as well as infrastructural development in Anambra State if you get the people’s mandate. These and more, you must endeavour to materialize once you become the Governor of Anambra State, by God’s grace.”