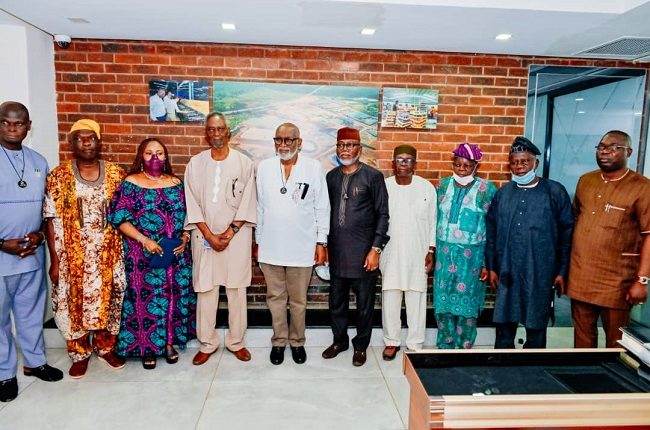 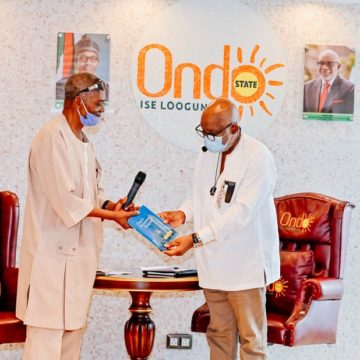 The Pan-Yoruba Socio-political Organisation, Afenifere, on Tuesday, saluted the courage of the governor of Ondo State, Mr Rotimi Akeredolu, in tackling and addressing the security challenges confronting the people of the state and the Southwest region.

Leading the delegate of Afenifere group to the governor’s office on a courtesy visit, on Tuesday, the Secretary-General, Bashorun Sehinde Arogbofa, commended the leadership of Akeredolu in bringing together the Southwest governors to tackle insecurity and making the security of lives and properties of the people a priority.

Arogbofa said “We salute your courage. We saw the Amotekun thing as a forerunner to the state police. What can any government do without security? Security of lives and property should be the priority. We commend you.

Arogbofa also commended Akeredolu for taking the step to revive ranches in the state, saying this is a reasonable step to resolve the farmers/herders crisis, noting that the late sage, Chief Obafemi Awolowo established ranches in the region because Yoruba people were involved in the business.

Akeredolu, while speaking appreciated the foremost Yoruba organisation for acknowledging his efforts on security, stressing that the security of lives and properties is very crucial.

Akeredolu said “Thank you for noting our efforts on the security of the state. You have captured it succinctly in a way that you can’t put it better. We met with a lot of forces and it was not easy and it is still not easy.

“When you are forced into a corner where you have a security outfit without the right to carry the right arms. But we thank God that in all of Amotekun’s efforts till date, we have not suffered any casualty.

“Amotekun is going to be a forerunner for state police. We believe that our security architecture needs total restructuring. There must be a multi-level system of policing.

“President Muhammadu Buhari has done a few things on restructuring more than any President. But we are still clamouring for more. Thanks for your reference to ranches. We are not going to give our land to foreigners. But ranches are important.”

In spite of the huge investment in the water sector by the government and international organisations, water scarcity has grown to become a perennial nightmare for residents of Abeokuta, the Ogun State capital. This report x-rays the lives and experiences of residents in getting clean, potable and affordable water amidst the surge of COVID-19 cases in the state. You’ve led Southwest govs well. You’ve led Southwest govs well