Amotekun: What I discussed with IGP ― Makinde 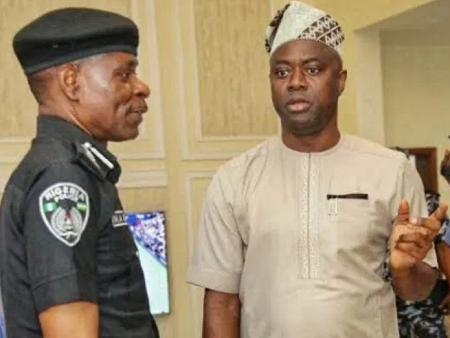 Oyo State Governor, Engineer Seyi Makinde, has disclosed that he had down to earth discussion with the Inspector General of Police (IGP), Mohammed Adamu, on Wednesday, on the operation of the South West regional security outfit, Amotekun and the actual state of things on the local government issues in the state.

Makinde made this known, on Thursday, in his goodwill address during the opening ceremony of the 80th Annual General Conference and new year message of the Cherubim and Seraphim Unification Church of Nigeria, held at the Sacred Cherubim & Seraphim Church, General headquarters secretariat, Ashi, Orita Bashorun, Ibadan.

Makinde, who was accompanied to the ceremony by the Chairman, Advisory Council, Senator Hosea Agboola and the Executive Assistant on Administration, Reverend Idowu Ogedengbe, reiterated that the security outfit was not created to replace police in the region but to complement the existing security network.

He said “I am very happy that Amotekun, the regional security outfit to which Oyo State strongly subscribed is shaping up brilliantly.

“Amotekun is a work in progress. All the issues that people have raised are being addressed but Amotekun is definitely here to stay.

“So, very soon, I am sure we will begin to reap the reward of project Amotekun.”

On the issue of the forceful takeover of local government by the sacked Lincoln chairmen which has generated crisis in the state in the last few days, Makinde said it “is an issue that is before the court and there is an injunction against the people that are trying to torment trouble here. For myself, as the Chief Security Officer of the State, we will definitely not allow lawlessness around here.”

He, then, urged members of the church ensure peace while practising their faith.

“All of us irrespective of our faith want good governance, that’s why you voted for me. We all want good living standard and development in our local government state and country.

“We should allow our faith to bring us together and not disintegrate us. I will work for the benefit of all to provide peaceful safe and secured state where we can all worship without fear.”

In his address, the Supreme Head, C &S Unification Church worldwide, His Most Eminence Prophet Dr Solomon Adegbiyega Alao, advised the Independent National Electoral Commission (INEC) to find a way to ensure that all election petition issues are sorted out before swearing on May 29,  citing the recent Supreme Court judgment that removed Honourable Emeka Ihedioha and declared Hope Uzodinma as the new governor.

According to Prophet Alao, “let’s see the case of Imo State where a governor was sacked after eight months. You could just imagine the overall consequences. Eight month wasted period. It’s on that that I am appealing to INEC, which has the responsibility to set election timetable for Nigeria, to conduct elections in November.

“And between November when the election is concluded and May swearing-in, all petition in relation to that election would have been sorted out up to the highest court. Whoever that is then sworn in, would be able to concentrate on governance.”

Pensioners hail el-Rufai over rise of pension to N30,000