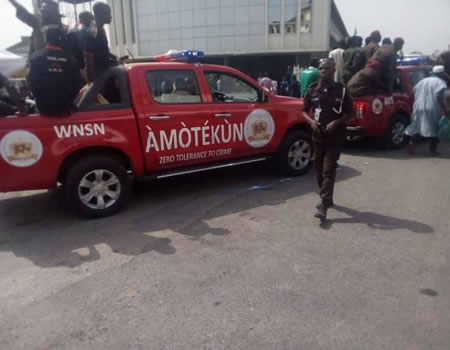 Lawmakers of the Ondo State House of Assembly will be calling off its recess over the need to deliberate on the Amotekun security bill.

This was contained in a statement issued and signed by the Director, Information Services, Ondo State House of Assembly, Mr Sehinde Fanokun, who said the lawmakers, who are billed to resume on the 24th February, would resume legislative duty tomorrow (Tuesday)

He said this is imperative in order to give legal backing to the Amotekun bill.

He explained that the state governor, Mr Rotimi Akeredolu, had last week forwarded the Security bill to the House of Assembly for legislative actions.

Fanokun, however, said a public hearing on the State security bill will hold on Wednesday at the House of Assembly complex and assured that the bill would be given an accelerated hearing.

The statement informed that the “lawmakers of the Ondo State House of Assembly will resume for legislative business on Tuesday 18th February 2020.

“This is to enable them deliberate on the security bill code name ‘Amotekun’ meant to ensure security across the nooks and crannies of the state.

“The Lawmakers who are currently on recess are supposed to resume on 24th February.”

He said further “the Executive arm having forwarded the Ondo State security bill code name ‘ Amotekun’ to the House of Assembly, while the Speaker, Oleyelogun Bamidele David, requested other Lawmakers to cut short their recess in order to attend to this very important legislative assignment.

“A public hearing on the State security bill will hold on Wednesday at the House of Assembly complex.

“It will draw contributions from members of the public on how best to fortify the operations of the ‘Amotekun’ security network.

“When operational the Amotekun security network is expected to among other things enhance security in the South West States of Nigeria.”

The South West States governors had earlier adopted a common security network code name Amotekun, in view of the threatening security issues in the zone.

As part of efforts to give legal backing to the operation of the security outfit, the South West governors resorted to seeking the approval of the Houses of Assembly on the bill.