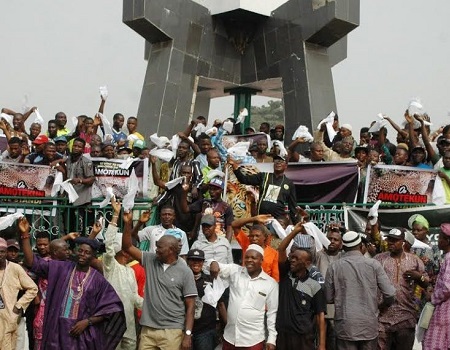 They converged on the popular Nelson Mandela Freedom Park venue of the exercise as early as 9.00 am and embarked on the walk through the major streets in Osogbo namely Oke-fia Roundabout, Alekuwodo, the popular Olaiya Junction, Ojaoba and other areas chanting singing solidarity songs.

Displaying placards with various inscriptions such as “Amotekun has come to stay,” “No going back on Amotekun,” “Solution to insecurity in South West”, “We need to save our people in South West,” among others, just as armed security operatives including DSS, Police, members of the Nigeria Security and Civil Defence Corps (NSCDC) provided security for the protest.

Speaking to journalists, the chairman of YWC, Osun State Chapter and convener of the protest, Dr. Akin Adejuwon explained that the exercise was targeted at creating awareness, mobilizing people and affirming that Amotekun had come to stay in the South West.

According to him, “It is not a protest but a walk of mobilization, awareness, and sensitisation of people to the fact that Amotekun is being deployed on their behalf.”

“The South Western part has been known to be the most peaceful part of Nigeria for generations. But we have discovered that the peace is being cut short by some calculated efforts by brigands and all sorts of negative powers. That is why we have to bring all that to a stop.”

“The essence of Omoluabi is to respond to the need of your people and that is what they have just done. They know that we are with them and we are coming here today to tell them that anybody that is not with them is on his own”, Adejuwon remarked.

Baring his position on the protest, another leader of YWC, Mr. Sola Fatokun emphasised that state policing had become imperative with a view to tackle the increasing spate of insecurity challenges in the country.

He stated that “someone cannot sit down in Abuja and be monitoring and supervising what is happening in Osogbo. If the government can issue firearms to individuals, what prevents Southwest governors from having their own security outfit in Amotekun?”