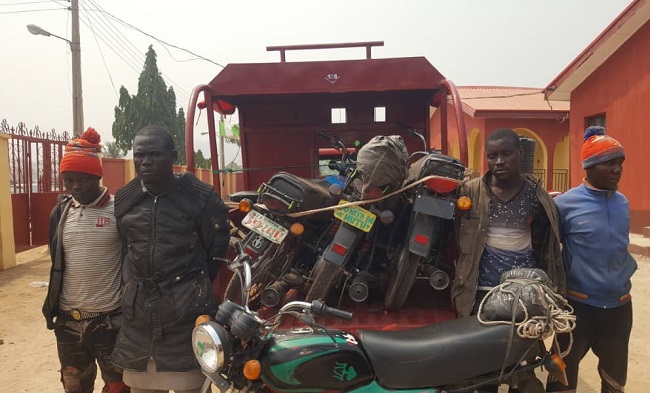 The Amotekun corps commander, Brigadier General Joe Komolafe (retd) while speaking with newsmen on Friday said the four suspects were coming from the northern part of the country into the state.

He gave the names of the suspects as Abubakar Sule, Sheu Usman, Abubakar Babangida and Sheu Mamuda.

He explained that during the routine patrol of the personnel, the four suspects who were said to be herders were intercepted and arrested on motorcycle around 9:00 am on Friday.

Komolafe added that the suspects upon interrogation could not give satisfactory response as to their mission in the state but confessed to being kidnappers.

According to him, materials found on them aside the four motorcycles included long rope which they confessed they often use to tie kidnap victims in the bush.

He said: ” Our men on routine patrol intercepted these four persons suspected to be kidnappers on Friday morning when they were making their ways into the state.

“They told us they were coming from Ilorin, Kwara State, on a motorcycle after they were brought in from the northern part of the country in a truck a few days ago. Upon questioning, they said they were heading to Akungba Akoko in Ondo State but with no clear mission here.

“What we found on them clearly gave them away as suspected kidnappers and also with their confession. One of them clearly wrote on his motorcycle in Hausa language, ‘Duniya Ba Hutu’ which means, No Peace in this world.

“None of the motorcycles has a number plate or documents to show ownership.”

The Amotekun commander noted the suspects would be handed over to the police for further investigation and prosecution.

Komolafe while assuring residents of the state that everything possible would be done to ward off criminal elements from the state, he solicited maximum cooperation on timely and accurate information on movements of strange individuals in their environment.

The surprise visit made on Friday night by the leaders of the ruling All Progressives Congress (APC) to former President Goodluck Jonathan at his residence in Abuja triggered a stir in the major political camps, resulting in at least four possible theories..Ekiti Amotekun arrests four