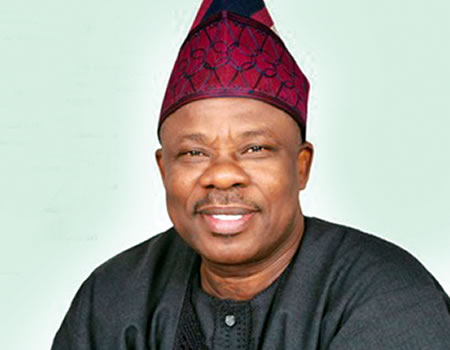 THE Ogun State Governor, Senator Ibikunle Amosun,  his predecessors, Chief Olusegun Osoba and Chief Gbenga Daniel, on Wednesday, paid their last respect in honour of a chieftain of the All Progressives Congress,  Alhaji Abimbola Awofeso.

Awofeso, a nephew of the Sage, Chief Obafemi Awolowo, died in his sleep at his Aiyegbami’s residence, Sagamu, on Wednesday morning and was committed to mother earth according to Islamic injunctions.

Other notable Nigerians at the burial were the co-chairman of the African Newspapers of Nigeria, Dr Olatokunbo Awolowo Dosumu, former members of the National Assembly, Senators Adegbenga Kaka and Akin Odunsi, Honourables Abiodun Abudu-Balogun and Taofeek Buraimoh.

In a short sermon, the deputy Chief Imam of Sagamu Central mosque, Fadeelat Sheik Abdulquadri Jinadu, described death as an inevitable end of all mankind.

The Islamic cleric said the deceased lived a worthy life as a devouted Muslim, saying his death was a colossal loss to the Muslim community in Sagamu, his family and the political circle.

“We shall give account of our deeds before Allah. Our departed Awofeso had done his beat and has left the stage.  Irrespective of your status, age, creed and sex, we shall all taste the bitter pills of death,” he added. Governor Amosun prayed for the family of the deceased.

Awofeso was a former member of the State House of Assembly in the 4th Legislature and former secretary of the defunct Action Congress of Nigeria and Social Democratic Party in the state. He was also the Ekerin Adinni of Remoland.