Amosun is an inspirational personality 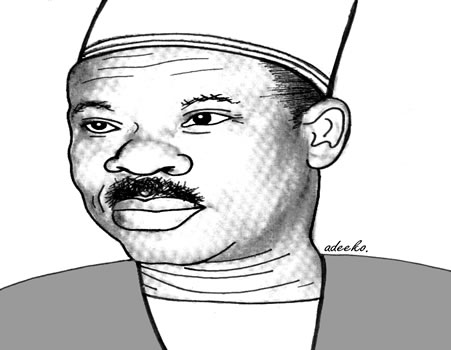 IT is rare to come across pure, simple selflessness, particularly in an age in which growing individualism defines modern humanity. But these are the traits that mark Senator Ibikunle Oyelaja Oluwatoyin Amosun, the Governor of Ogun State, whose inspirational values have touched the hearts and souls of hundreds of people who have come his way. He is one of the finest minds from the arena of humanity. A top-notch accountant and former distinguished member of the Upper Chamber of Nigeria’s National Assembly, Amosun, was born in Abeokuta on January 25, 1958 (61 years ago today). He attended African Church Primary School, Abeokuta (1965-1970); African Church Grammar School, Abeokuta (1971-1977); Ogun State Polytechnic, Abeokuta (now Moshood Abiola Polytechnic) (1979-1983); University of Westminster, London  (M.A. in International Finance, 2000). Through industry and obsession for professional excellence, Amosun, in 1996, became an Associate Member, Institute of Chartered Accountants of Nigeria. In 1998, he became an Associate Member of the Institute of Taxation and in 2003; he crowned the glorious career with his induction into the hallowed portals of the Institute of Chartered Accountants of Nigeria as a Fellow.

Amosun is a distinguished personality. He is critical, but always fair minded, regardless of political differences. His humility is disarming. His smiles are electrifying and his sense of justice intriguing. He has brought to governance and leadership, a commitment from which young people can learn from. Amosun has silenced his critics, he has astonished sceptics. He has perhaps surprised himself. His political friends and foes seem to agree however on one thing that Governor Amosun has remarkably and visibly changed the status of Ogun State for the better. Nobody for now really knows what his magic formula is. What is however well known, at least in the language of the local folks, is that things are simply getting better. For most people in Ogun State, the momentum and tempo of development have surpassed their wildest imaginations. Road network in Abeokuta, Ijebu Ode, Sagamu, Imeko-Afon, Aiyetoro and hinterlands have never been so good.

The sheer size, spread and speed of economic activity is generating a compelling, not just for indigenes in Nigeria and abroad but also for new businesses.  The development of Ogun State’s economic potential in the agricultural sector is a critical part of the ‘Mission to Rebuild’ agenda of the Amosun administration. The proximity of Ogun State to a vibrant consumer market and the abundance of land and labour make the development of the sector compelling. Since May 2011, more than 40,221 hectares of agricultural land have been allocated to the development of various crops and the raising of livestock, notably poultry. Priority crops include cassava, rice, oil palm, cocoa and a range of vegetables. The administration entered into an agreement with the Malaysian Ministry of Agriculture to develop a 500-hectare rice plantation, positioning Ogun State to help drive an important dimension of the national economic diversification efforts.  It also developed farm estates for both crops and livestock, engaging young farmers within the state in agriculture. The Amosun administration has also launched 86 units of land-clearing equipment, the very first of such quantum purchase in one fell swoop since the creation of Ogun State, thus opening a new chapter in the history of the agriculture sector in the State. The farm machinery include 4 CAT bulldozers, 30 MF 275 Xtra tractors, 33 Baldan Disc Ploughs,15 Baldan Disc Harrows, 2 Baldan Rotary Slashers and 2 Baldan 4 Row–Planters. The governor had equally announced a discount rate of up to 80 per cent for land acquisition by investors genuinely interested in agriculture.

In order to attract graduates of Agriculture and allied disciplines to farming and reduce unemployment, a model Farm Estate in Owowo, complete with modern social amenities, has been developed. The plan is to replicate this across the State. The Owowo Model Farm Estate is modelled after Farm Settlement Schemes of the old Western Region. It has been built to create a modern farming community for youths to engage in integrated and sustainable agriculture – producing crops, livestock applying best practices to ensure optimum returns. Ultimately, these projects help to orientate the view of young graduates towards agriculture as a wealth creation opportunity, especially in the area of value chain prospects. Aside related buildings, the settlement has 42 fully-equipped residences providing a good environment within which the participants can carry out their agriculture production activities.

The Alagbagba cocoa project was established in 2014. 50Ha of hybrid cocoa of 18 months maturity was established, and allocated to 150 farmers. The cost of establishing the plantation was borne by the state. To date, the cocoa project has empowered about 1,500 farming families. Individual farmers maintain the allocated plots. Temporary shading of the young cocoa plants has been achieved by planting high yielding plantain alongside. A nursery has also been established to produce young stands for replacement of failed plants and expansion of the plantation. In the last seven and half years, the Amosun administration has commissioned Alagbagba Cocoa Plantation, Odeda and Owowo farm settlements, tomato plantation, Kotopo, Emuren (2000/day) Chicks Farm, Agbara oil plantation, 50 hectares cashew plantation at Ipokia, rice plantation at Egua, and two new farm estates in Igbogila and Ilaro. The government has in same vein signed agreement on over 1,000 hectares of land in collaboration with Africa Agricultural Technological Foundation (AATF) for the mechanisation of cassava production which has led to lower cost of production. It has also facilitated the reactivation of the South West Cotton ginnery at Ibara Orile under a public private partnership.

Notable efforts have also been made to harness the potential of Forestry. Ogun State entered into a landmark reforestation project with the private sector in 2015, affecting over 100,000 hectares of degraded forest land. Successful execution of the project will develop a significant Agro-Forestry ecosystem which will help to diversify the State’s economy, support rural economies and deliver benefits to the environment.

Ogun State has continued to reap maximum benefits from the enabling environment created for business growth.  The State is now unarguably the most industrialised in Nigeria. More than 130 new industries have been inaugurated between 2011 and 2017 and many more have indicated interest in setting up their businesses in Ogun State.

In addition to these milestones, significant work was also done to support the Micro, Small and Medium size businesses. The government partnered with the Bank of Industry to provide much needed funding for MSME entities, restructured and upgraded several markets across key cities in the State.

Over the past seven and half years, several hundreds of kilometres of roads have been constructed, expanded and resurfaced. The vision of the government is to create an environment that enables businesses to thrive, attracts investment and opens up new (and existing) areas for growth.

The Amosun government constructed the Ibara-Totoro Road, the first international standard six-lane road in the State.

It built the flyover at Ibara, Abeokuta, also the first constructed by any administration since the creation of the State in 1976. The   first 10-lane boulevard, which begins at Sokori and opens up into the elaborate Itoku Bridge, is a stamp of modernisation affixed to the state capital.

The Amosun government brought to reality the Mobalufon overhead bridge in Ijebu Ode, which had been in the master plan of the State for decades, thus closing the slaughter-slab at the Mobalufon end of the Sagamu-Benin Road. Other overhead bridges in Sabo, Sagamu, Lagos Garage in Ijebu Ode, Sapon and Iyana Mortuary in Abeokuta have been completed and commissioned while work is ongoing in those at Ijebu Igbo and Ilaro.

The government constructed the longest road, cutting across four local councils in Ogun West Senatorial District, the 107km Ilara-Ijoun Road. It ended the distress of commuters in and across Ado-Odo Ota Local Council through massive reconstruction of the strategically-located and commercially-important Ilo Awela Road and modernised Ota through modern township roads.

A number of housing developments have been completed, catering for a range of income levels. These include HID Awolowo Housing Estate, developed by the Ogun State Property and Investment Corporation (OPIC) at Oke-Mosan, Abeokuta, Plainfields Estate, developed by the Ogun State Housing Corporation and targeted at middle income earners in the State and A.A.K Degun at Laderin, which was built primarily for civil servants.

There is also the President Muhammadu Buhari Estate. It is on a 170-hectares expanse of land along the Abeokuta-Sagamu expressway and shares a boundary with the new Government Model School. It is designed as a Site and Services scheme and is strategically located at less than two minutes drive from the main Abeokuta Township.

Governor Amosun has delved into areas hitherto considered off limits by past administrators of the state. A pride of an era who is certain to be sung by his people, Ibikunle Amosun, an avuncular  politician and man of his people, on assuming office, promised the people new lease of life and emphasized he had no business in government than to serve.

There is no doubt that Governor Amosun has the drive, the initiative and the vision to leave Ogun State better than he met it. Very modest, articulate and principled, he is a silent performer who has warmed himself to the hearts of the people with his populist programmes as well as his well designed policy of developing an industrial and commercial economy that will provide wealth and abundant opportunities for his people.

Happy Birthday To His Excellency.

Of women’s contribution to male dominance

Okigbo and the Makerere conference