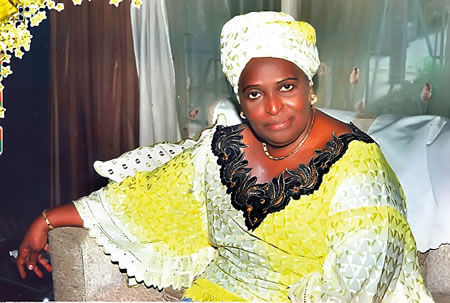 Former governor of Ogun State, Senator Ibikunle Amosun, on Monday eulogised the chairman of African Newspapers of Nigeria (ANN) Plc, publisher of the Tribune titles, late Reverend (Mrs) Omotola Oyediran, saying she was a rare gem, who cared for peoples’ interests and wellbeing while she was alive.

Amosun, who spoke with the Tribune Online shortly after paying a condolence visit to the family of the deceased at their residence along Ring Road, Ibadan urged Nigerians to emulate the good virtues and exemplary life of Reverend Oyediran.

He harped on the need for all, irrespective of tribal, religious and political divides to strive to leave good legacies by being supportive of the needy in the society.

According to him, “as being human, even if Reverend (Mrs) Omotola Oyediran had lived up to the year that her mother, Late Mrs H.I.D Awolowo, who lived up to almost 100 years, we would still miss her because she was a good woman. If you are not good, people will keep quiet and not say anything.”

“But, Mama Oyediran was very good, humble and kind. Because she was good, that is why we are saying this. She was a mother in a million. We are not related, but the way she treated us, you will think we are her biological children, including my wife.”

“There is none of our programme when I was in Abeokuta as the governor of Ogun State that she missed. Even, personal programmes, she was always there. The last time she came was for my birthday. However inconvenient it may be whether it was raining or not, she would come.”

“She had a good heart, what you see is what you get, no pretention. She was a good woman, very devoted and godly. Whenever she came, she would say I have nothing to give you other than prayers. After the prayers, she would say this is what I brought for you. Sometimes, it would be juice, drinks and other gifts.”

“We can only pray that the good Lord will grant her eternal rest and forgive her sins and stand by the family, most especially her husband, Professor A.B.O. Oyediran.”

“She was somebody that cared for others. It is not just about her background, her parental status. Despite her background of someone, who should be high up, she was very humble and related freely with everyone regardless of status. She mixed freely with the high and low stratum of the society.”

“She related with everybody, brings things to you and even go out of her way to serve others. I have learnt a lot from her. She was a God-fearing person, very fiercely loyal to anyone that she knows. She was sincere and straightforward woman”, Amosun remarked