•Accuses them of bias, misrepresentation of facts 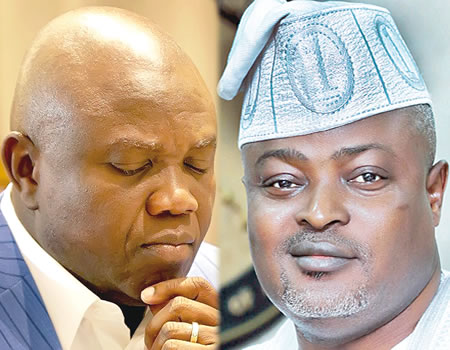 A Lagos High Court in Ikeja on Tuesday has ordered the State House of Assembly, the Speaker, Honourable Mudashiru Ajayi Obasa, to appear before it in connection with the ongoing probe of procurement of 820 buses by the administration of former governor of the state, Mr Akinwunmi Ambode.

Former Governor Ambode had instituted a suit against the Assembly to contest the constitutionality of the probe of the buses which he maintained were procured based on budgetary approval as part of the Bus Reform Project of his administration designed to revolutionize public transportation in line with global best practices.

Other defendants ordered to appear before the court at 9am on Wednesday, October 30, 2019, as contained in the statement made available to newsmen in Lagos, are the House Clerk, Mr. A. A. Sanni; Chairman of the Ad hoc Committee set up by the House to probe the procurement, Fatai Mojeed and members of the Committee.

Justice Adesanya ordered that the originating processes and all the accompanying processes filed by the claimant (Ambode) be served on the defendants and subsequently fixed Wednesday October 30, 2019 for hearing of the motion for interlocutory injunction.

According to his statement of claim before the court, the former governor said contrary to deliberate misrepresentation of facts by the lawmakers, the procurement of the 820 buses was well captured in the 2018 Appropriation Law which was duly approved by the House.

“Part of the items authorized by the Bill under Capital Expenditure was: ‘LAGBUS Public Transport Infrastructure (MEPB); Part financing of 820 buses’ which was Item 8 under Schedule 1- Part C of the Bill,” the former governor averred.

Ambode added that having prescribed the manner of withdrawal of funds in Sections 3 and 4 of the 2018 Appropriation Law, it was unconstitutional for the House to attach another condition in Section 9 of the law for further approval to be sought before incurring any expenditure on the purchase of the buses.

The former governor, while highlighting the specific breach of his constitutional rights to fair hearing by the House, said on August 27, 2019, during proceedings of the Assembly, some lawmakers thoroughly vilified and disparaged him as having purchased the buses without budgetary approval and that the procurement was a waste of public funds, while at the end of the proceedings, the House resolved to constitute an Ad Hoc Committee to probe the procurement.

He said it was surprising that the very lawmakers who contributed actively in vilifying, disparaging and denigrating him constituted the bulk of the members of the Committee, which was a clear derogation of his right to a fair hearing.

He added that in continuation of deliberate misrepresentation of facts of the issue, the House falsely claimed that an invitation had been extended to him to appear before the Committee but that he failed to honour the said invitation.

“On Thursday 10th October, 2019, the 4th and 5th Defendants (Mojeed and Yishawu) who are Chairman and member of the Committee respectively set up by the 1st Defendant pursuant to the provisions of Section 129 of the Constitution again raised on the floor of the House an allegation that the Claimant (Ambode) was invited to appear before the Committee but that he failed to do so whereupon the 2nd Defendant (Speaker) ruled that a warrant of arrest would be issued against the Claimant if he refuses to appear before the Committee.

“The Claimant states that no letter of invitation was delivered to him before the 4th and 5th Defendants made the false allegation against the Claimant which was widely reported by various national newspapers in the country.

“Further to the foregoing paragraphs, the 1st Defendant had also invited some of the former commissioners who served under my Governm6ent to appear before the 1st defendant on Tuesday 15th October 2019. These included former commissioners for Energy, Agriculture and Economic Planning and Budget respectively amongst others.

“After the proceedings of the committee on 15th October 2019, the 1st defendant represented to the public that the former commissioners that appeared before it had indicted me in their testimonies. The information was widely published by national newspapers on Wednesday 16th October 2019.

“Contrary to the information made to the public by the 1st defendant, the said former commissioners for Energy and Economic Planning and Budget who were represented by the 1st Defendant to have indicted me, made public statements on Thursday 17th October 2019 denying that they ever indicted me in their testimonies before the committee. The denials were widely published by online newspapers on Thursday 17th October 2019 and national newspapers on Friday 18th October 2019.

According to him, the house committee and indeed the entire members of the House had already adjudged him as having committed wastage of public fund by the procurement of the buses in question and had also already determined that the procurement was done by him as opposed to the state government.

He said it was obvious that the lawmakers were totally biased against him having regard to their pronouncements on the floor of the House by reason of which he believes that his right to fair hearing as guaranteed by the constitution had been seriously compromised by the defendants.

He is, therefore, seeking among others, the court’s declaration that the power of the House to pass a resolution under Section 128(1) of the constitution to cause an inquiry into his conduct as governor was subject to right to fair hearing as guaranteed by Section 36(1) of the constitution.

He also wants a declaration that the resolution of the house setting up a 9-man committee comprising of the 4th-12th defendants to investigate all transactions in respect of the 820 buses said by the defendants to have been procured by him derogates from his right as guaranteed by Section 36(1) of the constitution and therefore is unconstitutional, null and void.

Other claims are: “A Declaration that having regard to the provisions of sections 1, 2, 3 and 4 of the Appropriation Law of Lagos State 2018, sections 8 and 9 of the Law which required the approval of the House of Assembly of Lagos State before certain expenditure of money is incurred by the Executive Branch of the state is not in accord with any provision of the Constitution and accordingly is unconstitutional, null and void.

“A Declaration that it is not lawful for the defendants to represent or continue to represent to the public that the claimant, Akinwunmi Ambode, procured 820 buses in breach of budgetary approval.

An Injunction restraining the defendants whether by themselves, their servants, agents and or representatives from compelling the claimant, in any manner whatsoever, to appear before the defendants pursuant to the resolution passed by the Defendants on 27th August 2019 or any other Resolution passed in respect of the subject matter of this Suit.

“An injunction restraining the defendants whether by themselves, their servants, agents and or representatives from representing or continue to represent to the public that the claimant, Akinwunmi Ambode, procured 820 buses in breach of budgetary approval.”