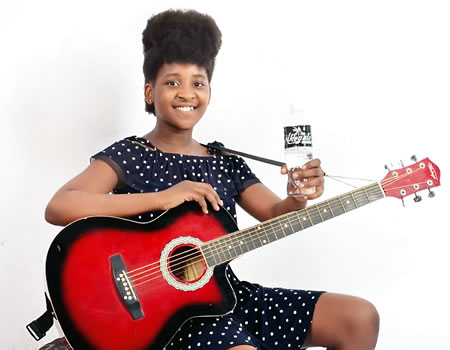 Music sensation and winner of Nigeria Got Talent, Amarachi has continued to step up her game and draw attention to herself with her music and stage performances, which have earned her accolades from within and outside the country. Amarachi who is currently planning to write her Senior School Certificate Examinations (SSCE), has sealed another mouth-watering deal with Akogate group of companies as the face of the water making company.

The news of the deal was revealed by Amarachi’s mum over the weekend when she spoke with newsmen shortly after they were informed of the deal.

The elated mother did not reveal what the new deal fetched the talented singer who has her name on a number of endorsement deals.

Speaking on their decision to pick Amarachi, the Managing Director of the Akogate, Felix Aganbi described Amarachi as a promising young girl whose life would inspire millions of young children to follow in her foot steps.

According to Aganbi, “Akogate group of companies hereby wishes all Nigerians a very hearty Independence Day celebration as we celebrate the new face of Akogate.”

He said further that Nigerians at this time should embrace peace and enjoy the independence celebration, adding that Akogate would continue to contribute to the development of the country through the empowerment of young and talented Nigerians who are willing to maximise their potential.

Yes, I have changed, move on with your lives, Adekunle Gold replies critics

Nigeria should be a comedy movie on Netflix —Praize