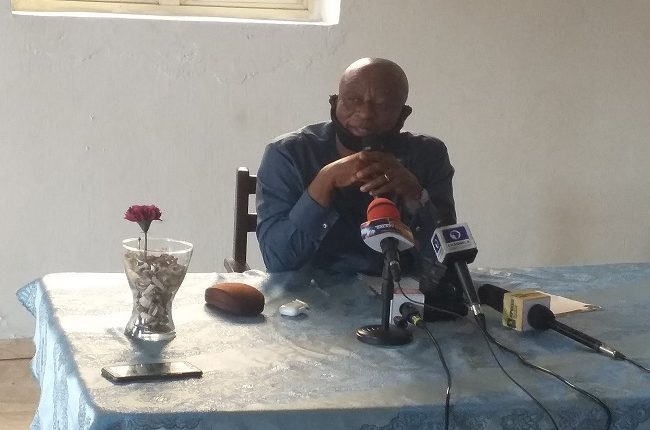 Former Minister of State for Education, Chief Kenneth Gbagi, on Saturday, says he’ll honour any invitation by the police over an alleged dehumanization of four staff of Signatious Hotel & Suites Ltd located at Effurun, Delta State.

Rumours of the arrest of the former minister by police operatives awash the social media as well as some online media on Friday.

The Inspector-General of Police, Mr Muhammed Adamu, had, on Friday, directed the Commissioner of Police in the State, Mr Muhammed Inuwa, to carry out a discreet investigation on the bestial incident.

Amid a protest by human rights activists, CP Inuwa confirmed that two members of staff from the hotel were arrested on Friday.

Meanwhile, speaking to journalists at his Oginibo country home on Saturday, Chief Gbagi denied being arrested by the police, saying “I’ve not been arrested and why should I be arrested? For what crime?”

He described the allegation of stripping Mr Victor Ephraim, Gloria Oguzie, Mrs Precious Achibong and Roselyn Okiemute Diaghwarh, naked over an alleged theft as a mere distraction ahead of his 2023 governorship ambition.

Gbagi, who said the allegations were mere distractions and a paid attempt to demean and destroy his reputation, added that “I’ve told my people to prepare for more heats; to prepare for the worst

“They may even bring the coffin to my house to label me a ritualist. I’m ready for them. I’ve paid my dues,” he boasted.

The business tycoon accused his political enemies of recruiting the four hotel workers, whom he described as “freelancers,” to stage-manage the stripping in order to blackmail him.

Gbagi, a chieftain and founding member of the People’s Democratic Party (PDP) in the state, said he’s determined to go for the governorship shot.

It will be recalled that Chief Gbagi, chairman of the hotel had, about a fortnight ago, allegedly supervised the stripping naked, photographing, arrest and prosecution of the four workers, over alleged theft.

The nude photos, it was gathered, eventually found their ways and went viral in the social media space, eliciting outrage from the public across the globe.

Gbagi has, however, denied involvement in the bestial act, arguing that two of the accused workers were caught in a sexual escapade in one of the guest rooms as well as stealing before he handed them over to police operatives at Ebrumede.

“There’s no injury in the body of any of them. A forensic investigation on them would show that I did not touch them.

“Two of them were in a sexual escapade in a guest room. They were sharing money that they stole when I caught them and handed them over to the police.

“I did not touch them. I won’t condescend to stripping them naked. Why should I strip people’s daughters naked for any reason?” he insisted, adding that the allegation was a planned job by his political traducers.

A fuel tanker has exploded at Anthony inward Gbagada, Lagos State. This happened as a result of the tanker losing control while on motion and fell sideways thereby leading to an explosion and got two unidentified vehicles burnt…Alleged stripping

The Lagos State government on Friday announced that it will close the popular Ojota interchange up to the second bridge in the area for three months beginning from Monday, September 21, for some repairs…Alleged stripping  Alleged stripping

Hundreds of followers of the Speaker of the House of Representatives, Hon. Femi Gbajabiamila have continued to react to the twitter message on his official twitter handle: @femigbaja, on his engagement with his counterparts from Ethiopia, Ghana, Kenya, Senegal and South Africa on the planned collaboration in the joint task of loosening the stranglehold of foreign debt on our economies, ahead of the 2021 conference of African Speakers, scheduled to hold in Abuja…Alleged stripping  Alleged stripping