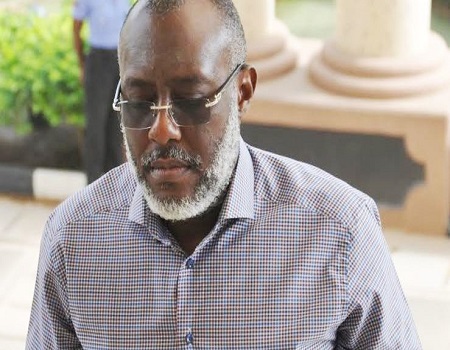 The Judge had, on November 26, 2019, fixed the judgment date after counsel to both parties had adopted their final written addresses for and against the charge slammed against the former PDP spokesman.

Metuh called 15 witnesses to prove his innocence of the money laundering charges brought against him by the Economic and Financial Crimes Commission (EFCC), which is prosecuting him on behalf of the Federal Government, alongside his company, Destra Investment Limited, on a seven-count charge bordering on money laundering to the tune of N400 million which he received from the Office of the National Security Adviser (ONSA) in the lead up to the 2015 general elections.

The court had in 2018 issued an order for Metuh to close his case but had to vacate it to enable him to call more witnesses.

On September 27, 2019, Metuh who testified as the 15th witness in his matter, told the court under cross-examination by the prosecution counsel, Sylvanus Tahir, that there was never an instance where former President Goodluck Jonathan directly gave any money to him, saying that his collection of N400 million from the former NSA, Col. Sambo Dasuki (rtd) was for a national assignment as directed by the then president.

The prosecution counsel presented a Diamond Bank document which captured the details of the transactions carried out by Metuh and his company, Destra Investment Limited, called eight witnesses, Metuh called 15 witnesses, while his company, called only one witness.

When the case came up on November 26, last year, the defence team, comprising, Mr. Abel Ozioko, who appeared for Metuh and Mr. Tochukwu Onwugbufor (SAN) for his company, urged the court to discharge and acquit their clients on the ground that the prosecution failed to prove the alleged offences against Metuh and his company.

But, the prosecution, led by Sylvanus Tahir, maintained that his team had proved all the offences charged beyond reasonable doubt and called on the judge to pass a guilty verdict on the defendants.

While adopting his brief of arguments, Ozioko, counsel to Metuh, had in urging the court to discharge and acquit his client, submitted that a total of 11 witnesses, including a prosecution witness, have testified as receiving various sums of money from Metuh, both in cash and cheques as contained in exhibit G20, which has remained an unchallenged evidence.

He submitted that the testimony of Metuh was collaborated by witnesses to the fact that former President Goodluck Jonathan gave him an assignment on security issues, which was not challenged by the prosecution.

Ozioko further urged the court to note that exhibit BE, which is the e-payment mandate with certification, shows that all payments with regards to the N400 million complied with the statutory requirement.

He submitted that instead of vilifying former President Jonathan, he should take credit for the manner in which he handled the insecurity situation in the country before the 2015 elections using Metuh to achieve peace and oneness for the country.

The defence lawyer further submitted that the prosecution did not fulfill the condition of a predicate to establish that the source of the money is illicit to warrant a charge of money laundering to be filed against his client and urged the court to hold that, having failed to establish any case against Metuh, the only inescapable conclusion is to discharge and acquit him.

On his part, counsel to Destra Investment Limited, Tochukwu Onwugbufor (SAN) challenged the jurisdiction of the court to hear matters bordering on simple contract and further submitted that the issue of the source of money should first be determined by the court in other to establish a case of money laundering.

He said former President Jonathan would have been called to give evidence because only his evidence would have shown whether he authorised money or not.

The senior lawyer argued that throughout the trial, the prosecution never responded to the origin of that money adding that the failure of the prosecution to respond to the issue which is highlighted in the addresses of the defence is deemed to have accepted and admitted all the points and issues raised therein.

“Having conceded same, the court is urged to hold that the origin of the money is legitimate and if that is so, the entire charge of money laundering must fail”, Onwugbufor told the court.