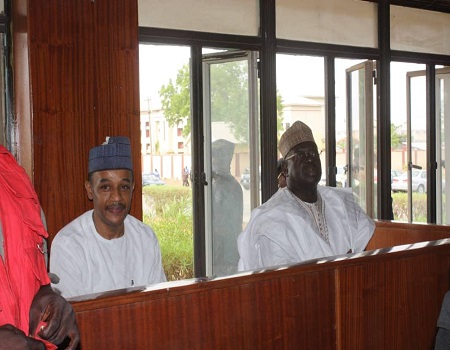 A Minna High Court on Thursday adjourned to 3rd of December, 2019 for the continuation of hearing in the trial against the former Governor of Niger State Dr Mu’azu Babangida Aliyu, his former Chief of Staff, Umar Gado Nasko and the state PDP Chairman Tanko Beji.

Babangida, Nasko and Beji are being prosecuted for alleged embezzlement of N800M Ecological fund, N1B Niger state shares in North-South Power and N937M government money used for the campaign.

At the resumed ruling today, Justice Mikail Abdullahi adjourned to allow the defence counsel to reply to an application filed by the Court for the full trial of proceedings case

However, a hot argument challenging the application filed by the prosecuting counsel ensured during today’s proceedings while Justice Mikail directed that the case management be conducted today to acquaint the Court with the number of witnesses that the defence counsel to the first Defender Ayodele Adedeji SAN as well as the number of documents to be produced to ensure speedy trial of the case.

The Judge opined that the relevant documents challenging the application ought to have been filed by the defence counsel.

Also, Defence Counsel to the second and third defenders had challenged the jurisdiction of the Court that similar matter against the defenders is ongoing in the Federal High Court in Minna. Noting that is jeopardizing the speedy administration of Justice.

After all submissions by both Counsels Justice Mikail Abdullahi then Adjourned the case to December 3, 2019, for the commencement of the pre-trial into the case.