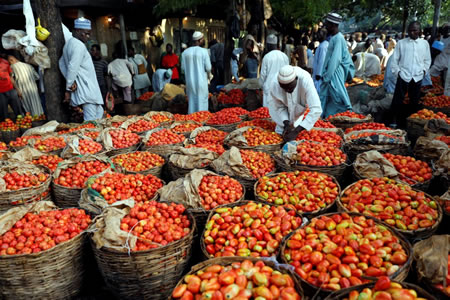 THE Presidency has ordered the National Agency for Food and Drug Administration and Control (NAFDAC) to be vigilant over alleged importation of poisonous tomato paste from Iran.

Mr Abubakar Jimoh, the Director of Public Affairs, NAFDAC, made this information known in an interview with News Agency of Nigeria (NAN) on Wednesday in Abuja.

Nigeria Customs Service (NCS) raised an alarm on expired and low-quality tomato paste in circulation across the country, saying its consumption is harmful to human health.

In a memo to various agencies signed by DCG (Tariff & Trade Department), TM Isa, the NCS said that instead of Brix 27-29 recommended, Brix 20-22 was allegedly imported into the country by MTV Investment Limited.

Jimoh, therefore, said that the Presidency had given the agency intelligence information to mount surveillance on the importation of the alleged poisonous tomato.

He added that the Director-General of NAFDAC, Prof. Moji Adeyeye, also gave marching orders to officials in the field to go round the country and ensure that such tomato did not come into the country.

He said that the surveillance would not only be limited to the alleged Iranian tomato paste but would be extended to other products to forestall any harmful goods coming into the country.

He explained that the Presidency gave NAFDAC the clue on the alleged poisonous tomato because Nigerians residing in Iran raised an alarm that such product might find its way into the country.

Jimoh added that NAFDAC had been up and doing to ensure that no poisonous or substandard product considered harmful was brought into the country.

The director said that Nigerian embassies abroad had been useful in the fight against drug and food poisoning, adding that they had remained the eyes and ears of Nigeria.

He said, “whenever they get information, they quickly inform appropriate quarters to take action, we were notified of the poisonous tomato.”

Christmas: Prices of tomatoes, pepper drop by 45% in Lagos