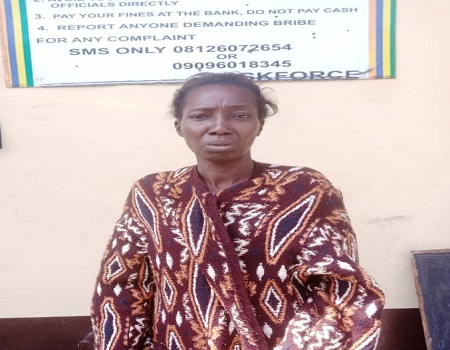 The Lagos State Environmental and Special Offences in (Enforcement) Unit (Task Force), on Wednesday, arraigned a fake female house agent, Mrs Bukola Ayorinde, at a Lagos Mobile Court over fraud in Ikorodu, accused of defrauding one of her clients the sum of N250,000 in respect of payment for an apartment at the Millennium Estate, Igbe in Ikorodu area of the state.

Chairman of the agency, CSP Olayinka Egbeyemi, revealed this in a statement made available to newsmen, saying that her arrest was effected after series of complaints from members of the public over some fake house agents obtaining a large sum of money from them and absconding.

The Task Force boss said the agency discovered after a thorough investigation that the suspect was the same person who had been defrauding innocent members of the public claiming to be house agent around Ikorodu axis.

The suspect, who appeared before Chief Magistrate Abimbola Oshodi-Makanju of the Lagos State Mobile Court sitting at Bolade in Oshodi, was charged for “Conduct likely to cause a breach of peace, cheating and obtaining N250.000 under false pretence.”

“Bukola Ayorinde, however, pleaded ‘guilty’ to the 3-count charge which necessitated an adjournment to Friday, 26th of June, 2020 for a ‘fact and sentence’ judgment by the Magistrate,” Egbeyemi disclosed.

The Task Force boss, while appealing to members of the public to be wary of these criminal elements when securing accommodation in any parts of the state, confirmed that it was in line with the directive of the Lagos State Commissioner of Police, CP Hakeem Odumosu, that the suspect be charged to court for prosecution.