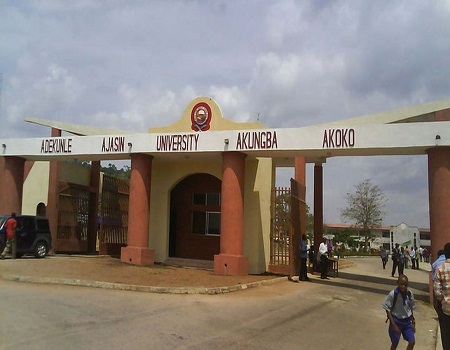 The Academic Staff Union of Universities (ASUU), Adekunle Ajasin University, Akungba-Akoko, Ondo state, (AAUA) branch, has raised the alarm over the imminent collapse of the institution due to alleged underfunding by the state government.

The union who expressed concerns over the state of the University during its congress held last week alleged gross neglect in the areas of funding, saying the monthly subvention had been drastically reduced by the state government to pittance.

Speaking on behalf of the Union, the Branch Chairperson of the Union, Dr. Simon Ehiabhi, explained that the monthly subvention of the University in the 2015/2016 academic session which was N212.5m has been drastically reduced by the state Government to a paltry sum of N148m.

He noted that despite the increase in the number of academic staff increased from 382 to 456 with 45 of them being Professors while the academic programmes had increased to 63 from 61 in 2019/2020 academic session saying “the Union, therefore, finds it difficult to understand the rationale behind the reduction of the budgetary allocation to a growing University as AAUA by the state government”

Ehiabhi said the drop in the monthly subvention and budgetary allocation to the University has been affecting the school negatively, hindering its the  University to discharge its responsibilities, including prompt payment of salaries, and release of Union and Cooperative deductions.

“It is, therefore, disheartening to note that because of the drastic drop in subvention, which amounts to under-funding, the University is owing ASUU-AAUA over N12m as members check-off dues, while the Academic Staff Cooperative Multipurpose Society (ASCMS) is being owned over N100m which are deductions from Academic staff salaries.

“As a result of non-release of the Union’s check-off dues, it has become extremely difficult for the Union to carry out some of its statutory functions to members in particular and to the general public, while the ASCMS is also going through difficult challenges in promptly meeting the financial needs of its members as the Union and ASCMS have not received their deductions since January 2020 asides the backlog of other deductions.”

According to the ASUU branch, despite being underfunded, the school had been rated as the best state University in Nigeria on several occasions and also in the 2020 webometrics ranking due to the commitment and dedication of staff of the University to the goals of University education.

He however said “it is heart rending and unfortunate that the same members of staff are being subjected to poverty and penury as a result of non-payment of staff salaries as and when due.

The Union however called on the

state government, as a matter of urgency, bail the institution out of its present financial predicament, in order for the school to pay outstanding salaries of July, August, September and October 2020 and also the 10 months outstanding Union and Cooperative deductions, as a short term measure.

“As a long-term measure, the budgetary allocation (subvention) to Adekunle Ajasin University, Akungba-Akoko should be appreciably increased to be able to accommodate staff wage bills and other University activities. This becomes necessary in order to avoid imminent crisis and industrial disharmony.

“The Union is calling on the Governing Council of the University under the leadership of Barrister Tunji Abayomi, to assist the University in terms of sourcing for funds and also persuading the Visitor and governor of the state to urgently intervene so as to rescue members of staff and University from extinction” the AAUA ASUU said.