All kidnapped children will be freed ― Buhari 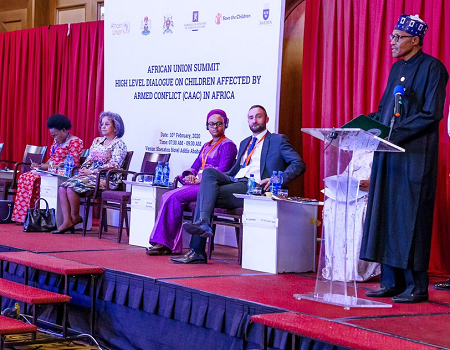 President Muhammadu Buhari has reassured Nigerians and the international community that all kidnapped children and other victims of abduction by terrorists in the country will be freed. 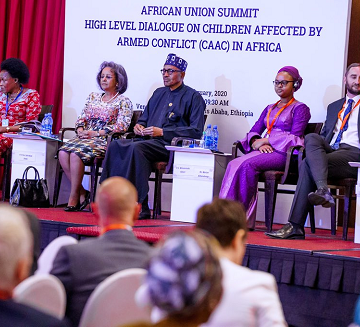 Re-affirming the “steadfast commitment” of his government to secure their freedom, on Monday in Addis Ababa, Ethiopia, the President renewed the pledge at a High-Level Breakfast Dialogue on “Stop the War on Children Affected by Armed Conflicts, Dividend of Silencing the Guns,” a side event during the 33rd African Union (AU) Summit.

According to a statement issued by Senior Special Assistant to the President (Media & Publicity), Garba Shehu,  the programme was co-sponsored by the Governments of Nigeria, Uganda and Norway, the AU Commission and Save the Children.

The statement quoted him as saying: “A number of schoolgirls from Chibok and Dapchi earlier abducted by Boko Haram have regained their freedom.

“We commend the gallant efforts of the Multinational Joint Task Force and the partners in supporting the reintegration of the girls.

“Let me categorically reassure you of the steadfast commitment of the Government of Nigeria to ensure the freedom of all kidnapped children from the shackles of Boko Haram.

“We will not relent until every child, boy, or girl, every Nigerian adult in custody of Boko Haram, is freed.”

The President urged African countries and stakeholders on the continent to work fervently towards strengthening the protection of children from the six grave violations during armed conflict.

The six grave violations are killing and maiming of children, recruitment or use of children as soldiers, sexual violence against children, abduction of children, attacks against schools or hospitals and denial of humanitarian access for children.

President Buhari expressed concern that these grave violations against children have continued unabated.

He added: ”It is for this reason that the Nigerian government has severally condemned, and is combating frontally the dreadful activities of terrorist groups like Boko Haram and the so-called Islamic State.

“Of course, the severity of these grave violations varies from country to country.

“The incidence of a single violation of children rights in any country is an indelible dent on the African consciousness and is to be deplored and condemned.”

Reminding the AU Member States of their commitments to protect children affected by armed conflicts in Africa, President Buhari reaffirmed Nigeria’s commitment to the protection of children in armed conflict zones.

He also used the occasion to outline some concrete measures taken by Nigeria towards tackling the root causes of child soldiers and the misfortune of out-of-school children.

“To stem the tide of out-of-school children, Nigeria embarked on an all-inclusive reconstruction of schools vandalised by the ravaging terrorist activities of Boko Haram, while returning children are rehabilitated and reintegrated into society.

“Our Nomadic Education policy is also being implemented to reduce the number of out-of-school children. We have also prioritized de-radicalisation and demobilisation of ex-combatant children of Boko Haram insurgents,” President Buhari said.

“The call to action is now for accountability by all African States to the rights of the children caught up in wars.

“Let us stop the war on children. This is a wake-up call for us all to create the enabling environment for rooting out the impact of armed conflicts against our children across the continent,” he said.

North-East: 200,000 displaced persons yet to be repatriated ― Zulum