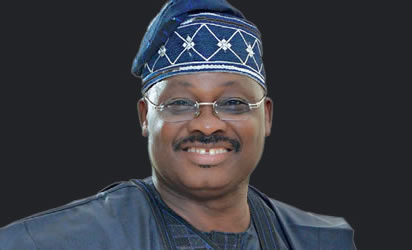 The Minister of Sports, Sunday Dare, has described the death of former Governor of Oyo State, Sen Abiola Ajimobi, as both untimely and tragic.

“The passing of my elder brother, Sen Abiola Ajimobi, is both untimely and tragic. He served the good people of Oyo for so long. We wanted him to use his experience to guide us through trying times. Sadly, dusk came too early and we must bid goodnight. Sun re, Aare of Ibadan!” he said.

“I just received the sad news of the passing of Senator Abiola Ajimobi, the immediate past Governor of Oyo State. At this difficult time, my prayers are with Florence, his wife; his entire family; and the people of Oyo State.”

“Inna lillahi wa inna ilayhi raji’un. I received with shock the death of Sen. Abiola Ajimobi—the immediate past governor of Oyo State. May Allah SWT ease the burden of the loss on the family and grant him the highest place in Jannah.”

Governor Adegboyega Oyetola of the State of Osun has commiserated with the family of the immediate past Governor of Oyo State, Senator Abiola Ajimobi.

Oyetola, in a statement signed by his Chief Press Secretary, Ismail Omipidan, described the former Oyo Governor’s death as unfortunate, painful & a great loss. He said his thoughts and prayers are with the Ajimobi family, the All Progressives Congress, APC, &the people of Oyo State.

“I am shocked and saddened by the demise of Senator Abiola Ajimobi. His death is unfortunate, painful and a huge loss. My thoughts and prayers are with the Ajimobi family, his loved ones, the All Progressives Congress (APC) and the people of Oyo State, whom he served meritoriously as Governor for eight years,” the governor said.

“Senator Ajimobi was also a true progressive and loyal party man. He was committed to the ideals of the APC and will be sorely missed by the party.”

Governor Oyetola prayed to Almighty Allah to overlook his shortcomings and grant him aljanah firdaus.

The former governor of Oyo State, Chief  Adebayo Alao-Akala, has also expressed shock and disbelief on the death of the immediate past governor of the state, Senator Abiola Ajimobi.

Chief Alao-Akala, who condoled with the state governor, Mr Seyi Makinde, the Olubadan of Ibadanland, Oba Saliu Adetunji and the entire people of the state, praised the transformation and repositioning efforts of the late governor when he was at the helm of affairs of the state for eight years.

“Ajimobi will always say his mind in any national and state matters. He talked frankly and he joked a lot,” he said.

Specifically, he said  Senator Ajimobi made his mark in the security apparatus of the state, adding that the state and the nation had lost a political icon.

“Indeed, it is a big loss to Oyo State, APC and the entire nation. He was a courageous, hardworking, loving and God-fearing leader. Personally I  will miss him for his jokes and effective service delivery’’, Alao-Akala said.

Akala, however, pray God to give the family, his political associates and the people he served the fortitude to bear the irreparable vacuum by his exit.