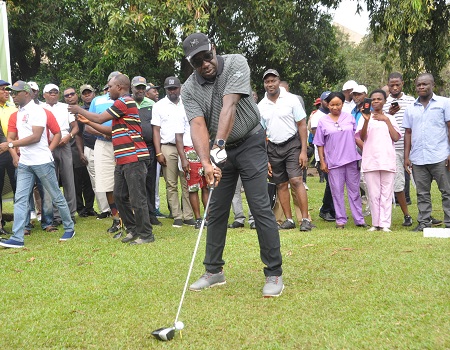 The golf tournament which started on an exciting note after the two governors made their entry into the Benin Club golf course, is part of activities marking the governor’s second-year anniversary celebration.

Asked what his expectation was, ahead of the tournament that has him (Lalong), Obaseki, Shaibu and captain of the Benin Golf Club, Osagie Nehikhare in a team, Lalong simply said that he was in Benin City to defeat Obaseki in golf.

A visibly excited Obaseki retorted that the defeat would be an uphill task to accomplish on his home soil.

The event which witnessed a strong corporate presence is supported by leading real estate developer, MIXTA Nigeria, some commercial banks and major players in the agro-allied industry.

2019 governorship election in Taraba will be a walk over ― Ishaku

Why we took over management of five DisCos ― FG