Entertainment
By Tribune Online On Aug 28, 2019 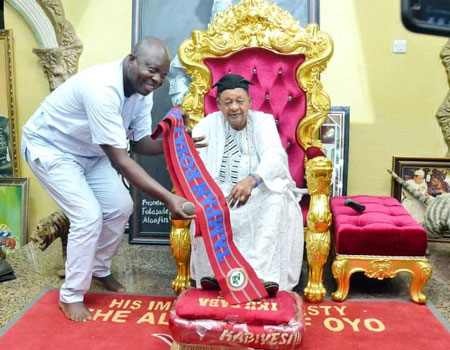 In what looked like a mini celebration in the palace of Oyo, the Alaafin of Oyo, Oba Lamidi Adeyemi, was decorated as Life Royal Grand Patron of Theatre Arts and Motion Pictures Producers’ Association of Nigeria (TAMPAN).

President of TAMPAN, Mr Bolaji Amusan, did the investiture that was witnessed by the Oyomesis and other visitors.

In his opening remark, Amusan extolled the virtues of the traditional ruler, describing him as a dignified king who promotes the art and culture of the Yoruba.

He said that the efforts of Oba Adeyemi in the preservation and promotion of Yoruba heritage continue to enunciate and expose Yoruba custom, norm and social behaviour to the world.

“In recognition of his consistent endeavours to secure our culture from peril and extinction, the members TAMPAN find him worthy of the honour as the Life Royal Grand Patron of the most populous association in Nigeria,” he said.

The elated Oba Adeyemi commended the movie stars for their services to humanity.

He cited Oyo town as the place where the commercial theatre was started in 1853 during the reign of Alaafin Ogboluke and their movement from Oyo Oko to where Oyo is situated till today.

He promises to continue to uphold the culture which he described as the best.

Oba Adeyemi will be formally decorated during the association’s annual conference coming up in Ibadan from  December 11 to 14.

The theme of the conference, which is going to be attended by more than 5,000 people from across the globe, is “Theatre and Filmmaking as Sociological tools for Development”.