Akpabio vs Akpanudoedehe: Who laughs last? 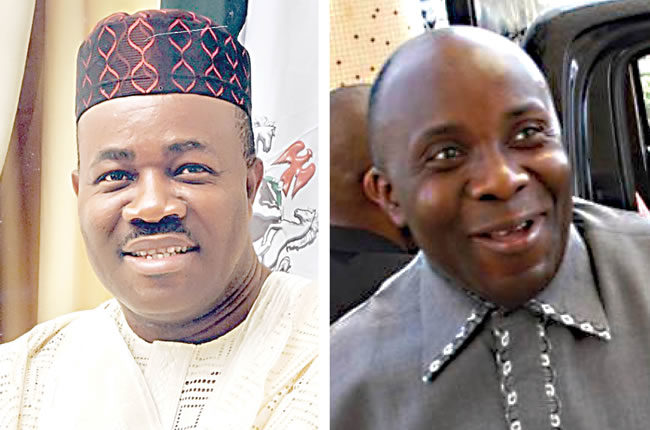 Ahead the 2023 general election, ordinary faithful of the All Progressives Congress (APC) In Akwa Ibom State are angry with its chieftains. The supporters of the APC, already living with the conviction that the oil-rich state is up for grab, owing to the unnerving internal dissension within the Peoples Democratic Party  (PDP) that has ruled the state since 1999, are beginning to get forlorn. No thanks to the leadership tussle between the chieftains of the APC for the control of its structures.

Two chieftains of the APC are embroiled in war of attrition for the structures in Akwa-Ibom: immediate past national secretary of the APC Caretaker/ Extraordinary Convention Planning Committee (CECPC),  Senator John James Akpanudoedehe and a former governor of the state and serving Minister of Niger Delta Affairs, Honourable Godswill Akpabio.

Further investigation revealed that parallel state congresses were held last October in the state. While the congress accorded recognition by the Governor Mai Mala Buni-led APC CECPC and supervised by Alhaji Sheriff Banki produced Augustine Ekanem as chairman, having polled 1, 278 out of 1,794 delegates, with officials of the Independent National Electoral Commission (INEC) in attendance, Stephen Leo Ntukekpo, who had put up brief appearance at the venue of the congress later emerged as factional chairman at a “congress” conducted at a separate venue.

Honourable Ekanem had received Certificate of Returns along with other state chairmen at an elaborate event held at Buhari House, the APC national secretariat.

The leadership tussle, however, took a dramatic twist when Ntukekpo surfaced at the party headquarters to take oath of office, supervised by the new APC national chairman, Senator Abdullahi Adamu, in deference to a court pronouncement. While ruling on an application before him in a suit filed by Ntukekpo, Justice Taiwo Taiwo of the Federal High Court, Abuja, had on March 17, removed   Ekanem and other party executives, and ordered him replaced with Ntukekpo who incidentally was the plaintiff. Joined as defendants were Governor Buni and the APC CECPC, APC national secretary, Senator Akpanudoedehe, (who was joined   both as national secretary and his personal capacity) and the INEC. The judge had premised his ruling on the summary “result sheet” of the October 16, 2021 APC Akwa Ibom State Congress presented as exhibit by Ntukekpo which showed him as duly elected chairman.

The court ruled that Ekanem who was given Certificate of Return did not participate in the congress in which he polled the highest number of votes. “The purported substitution of the plaintiffs as members of the Akwa Ibom State Executive Committee of the APC, with unelected persons chosen by the 1st to 3rd defendants, and, who did not participate at the state congress of the party held on October 16, 2021 is unlawful and illegal,” Justice Taiwo had said in the ruling.

While agitated party chieftains were aghast at the turn of event, Alhaji Sheriff Banki who was chairman of the seven man panel that conducted the Congress supervised by INEC had petitioned the APC CECPC,   alleging that Ntukekpo misled the Abuja High Court by allegedly presenting forged document before Justice Taiwo. In a petition dated January 11, 2022, Alhaji Banki alleged that the results sheet being paraded by Ntukekpo was fake. His petition read in part:” As you may recall, you appointed me as the chairman of the APC Congress Committee to Akwa Ibom State for the Ward, LGA, and State’s Congresses, and I acquitted myself creditably. I submitted the results and the reports accordingly, but to my utter dismay, my attention was drawn to a suit filed in the Federal High Court, Abuja, by one Stephen Leo Ntukekpo who swore to an affidavit and attached fake results sheets where my signature was forged and he declared himself the State Chairman-elect for Akwa Ibom State.”

A former Minister of Petroleum, Don Etiebet, who was also present at venue of the congress supervised by Alhaji Banki had expressed his disaffection over the recognition accorded Ntukekpo and his team by APC national secretariat. Speaking with Nigerian Tribune recently, Etiebet said the Senator Adamu-led NWC acted in error. He said: “APC erroneously, mistakenly sworn. The national leadership in performing that was deceived, ill-informed and we have taken immediate steps to inform them properly. We wrote a letter to the national chairman and said all what he was told were lies and he has taken cognisance of that. And our adversaries who are good at telling lies have brought out a court order that his factional chairman should be sworn in. A man who didn’t attend the Congress, couldn’t have been elected.

“We have told them that the judicial order form the Abuja High court was given out of ignorance because they don’t know the fact of the case. The Appeal Court has said the status quo before the high court order was given be maintained. What is the status quo? That (Augustine Ekanem has been sworn in along with 35 others by the CECPC. So, the new NWC has no locus or power to override the national convention. The people who are best in telling lies, whose character is in telling lies, have said the party has withdrawn its appeal in order to dismiss the appeal. The CECPC took the step to appeal the order of the High Court. It didn’t withdraw its appeal.”

The immediate past national secretary of the APC, Senator Akpanudoedehe, who was joined as defendants in the ruling by Justice Taiwo had approached the Court of Appeal for stay of execution of the High Court order. Justice Haruna Simon Tsammani of the Court of Appeal while adjourning the hearing of the Motion till May 17, 2022 for hearing however ordered the two sides to maintain status quo, pending the hearing and determination of the applications before him. It was gathered that the former national secretary of the APC had since accused the Adamu-led NWC of treating the Court of Appeal order with levity. In a letter to the APC national chairman by Taiwo E. Taiwo, (SAN) counsel to Senator Akpanudoedehe, dated April 7, 2022, he frowned at the swearing into office the Ntukekpo faction. The former national secretary further warned that the action of the party national secretariat was in defiance of the pronouncement of Justice Tsammani.

Reacting to insinuation that his appearance before the Court of Appeal was in breach of the APC Constitution which frowned at litigation on party matters, the APC national secretary told newsmen in Abuja that he took the action because he was joined in the suit instituted by Ntukekpo. He said: “Let me use this opportunity to debunk the impression created by certain quarters that I’m in court with a party. No. It can never be. Having been a National Secretary, I understand the rules. I was also part of the decision making that you cannot take your party to court. What we’re doing, we actually were third defendants in the case; that was the case of Stephen Ntukekpo and the party.  It was him that took the party to court.

“He sued me as a national secretary, they also sued me in my personal capacity. And they actually, in the affidavit that I mentioned in the letter to the national chairman, tried to blackmail my character and my tenure as a national secretary, as a person. So I have a duty to defend myself in the Court of Appeals. Not that I initiated a case against the party, I have never, and I am not doing it. So, that impression is blackmail. It’s not me, and it will never be me. I’m not in the court against my party, I will never do it. I’m a true party man. I’m in court to defend my integrity because of my children and my grandchildren. My character and what I stand for, that’s all.”

At the national secretariat of the APC, mum was the word on the impasse in Akwa Ibom State. National vice chairman of the APC (South-South), Victor Giadom, however, gave indication that the party was worried and would initiate reconciliation. Speaking at the formal declaration of Senator Akpanudoedehe for the APC governorship ticket, Giadom urged the leaders of the party in the state to close ranks and work as a united political family as he expressed the hope that PDP could be ousted at the next general election. “Nobody can say we aren’t strong in Akwa Ibom. Let us keep working together, we are close to election and this isn’t time for us to fight ourselves but work together for the actualisation of APC success in Akwa Ibom. Let us come together, allow for give and take and face our common enemy. We must work together so that we can bring victory.’