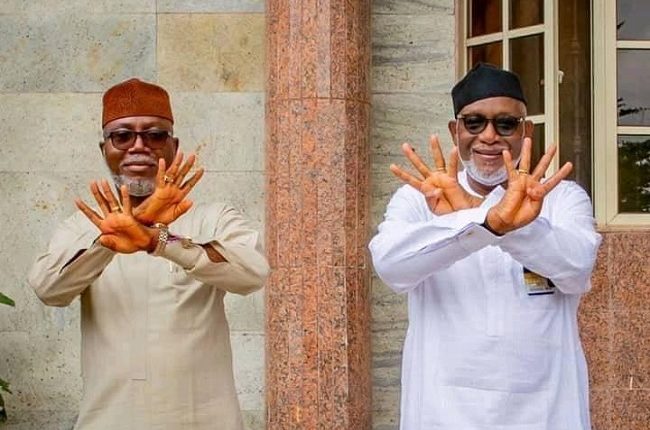 The inauguration ceremony of the Ondo State Governor, Mr Rotimi Akeredolu and the Deputy governor-elect, Mr Lucky Ayedatiwa will be a low-key affair as the public will be restricted from participating in the events, in view of the coronavirus pandemic.

The Chairman of the Inauguration Committee and the Deputy governor-elect, Mr Ayedatiwa who disclosed this on Friday during a press conference to herald the second term inauguration of Akeredolu, however, said plans are in top gear for the low- key inauguration.

Ayedatiwa said that invitations for the programmes slated for the event will be limited to very few people.

He said “It is important to stress that attendance at every function will be strictly by invitation. This is in order to control the crowd and reduce the risks associated with COVID -19.

“In other words, the venues will be a no-go area for individuals without official invitation cards. For more emphasis, the DOME which sits at full capacity of 1,800 guests will now sit 500 for the inauguration while it will accommodate only 400 for the state Dinner later in the evening.”

He disclosed that the week long activities will include the Inauguration lecture which will come up on Tuesday, 23rd February 2021, and will be delivered by the President Development Bank, Dr Akinwumi Adesina, with the theme: “Towards A New Nigeria: From Federal Fatherism to a Commonwealth.”

According to him, the lecture is scheduled to hold at the International Event Centre, The Dome while the swearing in ceremony will hold on Wednesday, 24th February at the same venue

Other activities lined up for the inauguration include the inauguration dinner, the commissioning of the Akure/Idanre road, inter schools debate and the world gyration of the Kegite club of Nigeria at the International Culture and Event Center.

He also disclosed that the event will also include the foundation laying ceremony of the new governor’s lodge, Jumat Thanksgiving service at Owo Central Mosque, Owo, while Saturday, 27th February 2021 will be set aside for the inauguration feast across the 18 local government areas of the state.

The ceremony would be rounded up on Sunday, 28th February 2021with a Thanksgiving service at St. Andrews Anglican Cathedral, Owo.

Speaking on the Schools debate, Ayedatiwa said “the schools’ debate and presentation of awards won by Ondo state Public school is a well-thought-out component of the Inauguration ceremonies with a specific focus to elevate and celebrate our youths in the state.

“It is also to serve as the melting pot for the general public consisting of Parent, Teachers and Students and Government thereby ensuring the involvement of all layers in the society in the enthroning of the Government they truly voted in.

“Aside from above, Governor Akeredolu believes in the involvement of the younger generation in the journey to the future and will seize every opportunity to promote their excellence in conduct and scholarship in public space.

“This is why the schools’ debate provides our children who have excelled in the qualifier series an opportunity to demonstrate, before our very eyes, knowledge, competence and scholarly versatility renowned with Ondo state.

“In the same event, Mr Governor will receive in the public glare, the presentation of trophies, awards and laurels won by our children in public schools, at national and international collegiate competitions.”