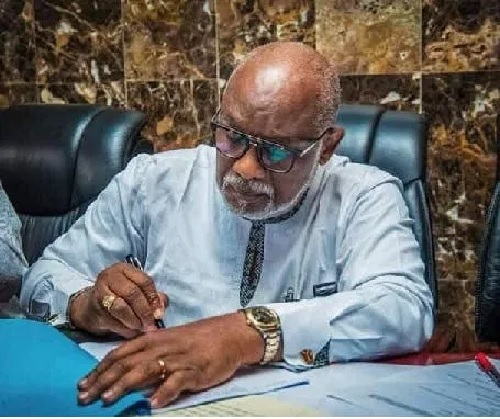 The Ondo State Government reiterated its commitment towards completing all abandoned projects in the state, just as it promised to deliver the 16.2km Akunnu-Ikaram-Oke-Agbe road after 18 years of neglect.

The state Commissioner for Works and Infrastructure, Engr Raimi Aminu, who gave this assurance during a monitoring tour of the road project, said the road will be completed in the next 60 days.

Aminu who noted that the road had been abandoned during the tenure of former governor Adebayo Adefarati administration some 18 years ago, said the road had affected the socio-economic activities of the communities in the area.

The Commissioner who said the Akunnu-Ikaram-Oke-Agbe road caught the attention of Governor  Akeredolu during his third year anniversary last year and directed the immediate reconstruction of the road which serves as a link road between the South-West and the Northern part of the country.

Aminu who expressed satisfaction over the quality of work done on the projects and said, “We are quite impressive with what they are doing here. The contractor is still working within the given time frame.

“The road was flagged off about a year ago during the third year anniversary of Akeredolu-led administration.

“The concrete work is almost completed because we have hydraulic structures of various sizes. The base course used is not ordinary base course, it is crushed stone base. We specifically designed that for this road because of the expected volume of traffic on the road after completion.

“If not the temporary blockage at Ikare axis, articulated vehicles like Dangote trucks and other of that nature would have been passing through the road. But we cannot stop them. That is why prepared in such a way it can accommodate such vehicles transversing the road.

He added that “The road is one of the major roads own by the government. It is the nerve between Ondo State and the Northern part of the country. Anybody going to Abuja, Kabba, Okene, Lokoja from any part of the South-West, this is the road they always pass through.

“Also, there is a very thick population in this area which is in the northern senatorial district of the state. They deserve the road and that is why Mr Governor gave it to them.

“This is just a little among road construction going on across the state. When the road was flagged off, so many people believed it was part of election gimmick, but it was not so. Either you like it or not Mr Governor will definitely do what he says, he won’t say what he cannot do. There is a paucity of fund everywhere, yet road construction is going on across the state.”

On his part, the contractor, Edgard Baral, said “As regards the quality of the project, engineers from the Ministry of Works are always with us to monitor the asphalt laying. They are making sure that the temperature is correct. They are also monitoring the mixing at our quarry which is very close to the site here.

“We are working within our best to deliver between one or two months but I hope to that we will deliver within one month.

In spite of the huge investment in the water sector by the government and international organisations, water scarcity has grown to become a perennial nightmare for residents of Abeokuta, the Ogun State capital..