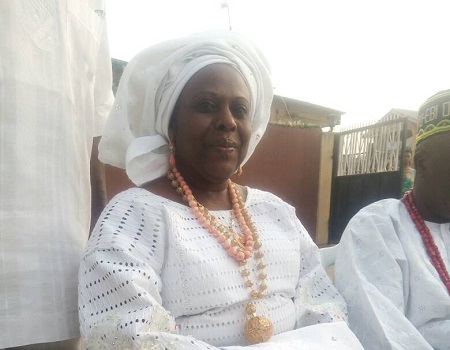 THE Akarigbo and Paramount Ruler of Remoland, Oba Babatunde Adewale Ajayi, on Monday, installed the former Ambassador of Nigeria to the Netherlands, Dr (Mrs) Tokunbo Awolowo-Dosumu, as the YeyeOba Liyangu of Remo Kingdom.

It was coming on the heels of her installation as the Asiwaju Onigbagbo Obirin of Ogun State, an honour bestowed on her by the Christian Association of Nigeria (CAN), Ogun State chapter, last Saturday.

The ceremony held at the Palace of Akarigbo, in Sagamu, had in attendance well-meaning Nigerians, including the eldest daughter of the Obafemi Awolowo Dynasty, Reverend Omotola Oyediran, Chief Idowu Sofola (SAN), the Archbishop of the Ecclesiastical Province of Lagos and Bishop of Remo, Most. Revd (Dr) Olusina Fape, Major General Joseph Soboiki and Iyaloja General of Remoland, Chief (Mrs) Mercy Owolana.

The installation ceremony was the first to be performed by Oba Ajayi since he ascended the throne, last December.

Oba Ajayi described the new chieftaincy titleholder as a worthy daughter of Remoland and commended her immense contributions to the development of the land, the state and the country in general.

He admonished Awolowo Dosumu for promoting peace in the entire Remoland and thereafter offered her prayers and blessings on her.

The Olotu Omooba Akarigbo, Chief Jas Adekunle, while presenting the new title holder to the traditional ruler, said Awolowo Dosumu’s choice was a unanimous decision of the family.

He said, “When we are looking for who to pick as the Yeyeoba Liyangu of Akarigbo, her name came up and there was no dissenting voice. All family members unanimously supported her choice and that is why we are here today to present her to your Majesty.

“I remembered that when we informed you, Kabiyesi, you appreciated our decision, that, she is a true daughter of the soil who deserves the honour.”

Responding, the Chairman of the African Newspapers of Nigeria PLC, said the honour done on her by the family was nothing but the grace of God upon her life.

She appreciated the traditional ruler for making the day a reality despite all odds and also prayed for peace and tranquillity during his reign in Remoland.

Awolowo Dosumu said, “I thank God for today because it has been long that the family had called upon me to take this title. I thank all members of the family, especially the Olotu Ebi for the support and love towards my late mother, Chief (Mrs) HID Awolowo and our family. I pray that this family will continue to wax stronger in love and unity.”

Earlier, the Olotu Ebi Omooba Liyangu, Chief Olutayo Dendoga Onafuwa, had prayed and formally presented the Yeye Oba to the family at a brief ceremony held at the family house.

I did not endorse Buhari/Osinbajo ticket — Awolowo Dosumu