Ajimobi handed down an unrealistic budget, contracts awarded only on paper ― Makinde 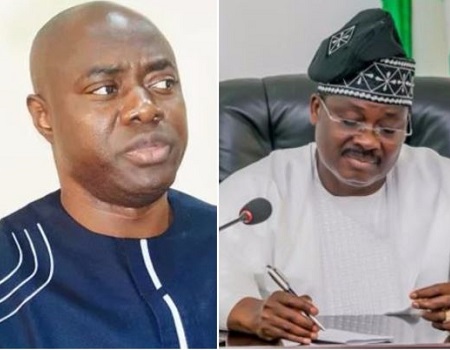 Governor Seyi Makinde has lambasted the former Governor Abiola Ajimobi-led government for handing down an unrealistic 2019 budget to the tune of N280 billion.

Makinde, who spoke during a media chat on the Broadcasting Corporation of Oyo State to mark his first month in office, said many projects in the current budget handed over by the Ajimobi government had contracts only awarded on paper.

According to Makinde, an examination of the budget showed a deficit of N200 billion when expected revenue is put against the expected revenue, comprising federal allocation and Internally Generated Revenue (IGR).

Noting that his administration would only budget what it can implement, Makinde said he had mandated the Ministry of Finance, Budget and Planning to begin work to reduce the current budget to about a realistic sum of about N150 billion.

This he said was towards achieving a budget performance of at least 65 percent henceforth.

While noting that he was still checking the books across ministries, Makinde said he had discovered that the debt accrued by the Ajimobi government amounted to at least N150 billion.

“N280 billion was budgeted. What is generated internally plus federal allocation is N80 billion? That means we have a gap of N200 billion in the budget.

“I asked government workers where we will get the N200 billion. I asked where they want us to get the deficit, they said most of those contracts awarded are on paper.

“I have mandated government workers to work on the budget that will work with from now till the end of the year. For the first time, I will reduce the budget.

“The budget performance in recent years is 38 to 40 percent. I will run a budget with a minimum performance of between 65 and 70 percent. We will budget based on our resources. The budget will be reduced from N280 billion to about N150 billion for the rest of the year.

“You see in the budget that a certain road is included but there is no monetary provision for the road. When they fail to carry out that project, they include it in the budget for the following year. We don’t want to do that.

“Though were are still checking the books, over N150 billion debt was met on ground,” Makinde said.

Meanwhile, with the ban on the Oyo state chapter of the National Union of Road Transport Workers (NURTW) clocking one month today, the wait on Makinde continues as he has said the ban will only be lifted if the two factions of the union show that they won’t clash anymore.

Makinde who spoke against the backdrop of a plea by union members that the ban is lifted stressed that his decision to ban the union had no political underpinning but the need to ensure that the state remained peaceful.

This is as Makinde said he won’t hesitate to activate the anti-terrorism act to jail anyone who threatened the peace of the state.

He explained that the ban was to prevent degeneration to the crisis going by reports of clashes among the two factions and palpable fear that gripped residents of the state upon his inauguration as governor.

Makinde added that he will not hesitate to wield the big hammer on persons or group of persons who posed a threat to peace and security in the state.

“We are in constant engagement with them. We are not out to punish anybody. We want people to live their lives as normal as possible. We don’t want to tamper with people’s means of livelihood.

“However, we cannot accept a situation where because of just a few persons making up the National Union of Road Transport Workers (NURTW), the rest of the people will be living in palpable fear.

“On the day of my inauguration, I heard that there were clashes between the two factions of the NURTW and I told them that regardless if they supported me during the election or not, elections are over and this is governance.

“So, I swore to an oath to ensure the safety of our people. So, if they are ready and they demonstrate to us that there won’t be clashes anymore, I will lift the ban almost immediately. That is the condition they must fulfill. We will never go back to a situation where people were killed at Iwo Road.

“I don’t want a single life to be lost during my watch. And I will wield the big hammer if I sense that something untoward is about to happen. I won’t wait until it happens.

“And I need to warn the union of the existence of the anti-terrorism act. I will put as many in jail if they are not ready to maintain peace in Oyo state. It doesn’t matter whether you were our supporter during the election or not. It is the same standard for everybody,” Makinde said.

Also on the management of the NURTW, Makinde said the state government would collaborate with the union on the collection of loading and other park fees.

Prior to this collaboration, however, he said the state government will embark on a transformation of motor parks to make them modernized and standardized before he makes 100 days in office.

Once the parks are modernized, he said the state will have a law binding transport operators to load their vehicles only within the parks.

“We have plans to improve the Internally Generated Revenue (IGR) however we don’t want to do it at the expense of the hardworking people of Oyo state.

“If we want to collect those fees, we need to provide motor parks that are conducive and modern. I have detailed people to look at those areas earmarked as parks because as they stay on the road is not good enough.

“We will transform those motor parks and even if government and NURTW collect those fees and we share it, the government has to play its own roles too. There have to be conveniences, electricity, good waste collection system, such that they know that what government gets is being used to transform those parks. Before the first 100 days, you will see the transformation.

“Once we transform those packs, there will be a binding law to enforce compliance to loading inside parks,” Makinde added.