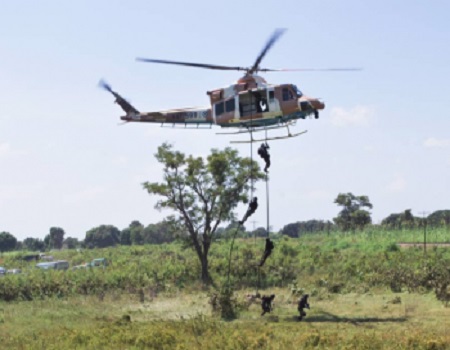 The Defence Headquarters (DHQ) on Friday said that in continuation of the intensive air operations to rid the North East of the country of terrorist elements, the Air Task Force of Operation LAFIYA DOLE has destroyed some Boko Haram Terrorists’ (BHTs’) vehicles and killed several of their fighters along the Jakana axis of Borno State.

This was contained in a statement made available to newsmen in Abuja by the Coordinator, Defence Media Operations (DMO), Major General John Eneche.

Gen. Enenche explained that this was achieved through airstrikes executed on Thursday after intelligence reports revealed that the Boko Haram Fighters were conducting another logistics movement through the Jakana-Mainok axis of the State.

According to him, “a Nigerian Air Force (NAF) Intelligence, Surveillance and Reconnaissance (ISR) aircraft dispatched to the area subsequently spotted the BHTs’ vehicles at a location South of Jakana.

“Accordingly, the Air Task Force scrambled NAF helicopter gunships to engage the convoy in successive waves of attack, delivering accurate hits in the target area which resulted in the destruction of two of the Bandits’ vehicles.

He added that several of the terrorists were also eliminated while one of the logistics vehicles was seen overturned.

Gen. Enenche assured that the Armed Forces of Nigeria would not relent until all enemies of the nation were neutralised and normalcy was restored to all troubled zones of the country.

The British Parliament at the Westminster Hall held a debate on ‘e-petition 554150, relating to Nigeria and the sanctions regime’ on Monday. The government of the United Kingdom has however responded…Air Task Force hits  Air Task Force hits

The surprise visit made on Friday night by the leaders of the ruling All Progressives Congress (APC) to former President Goodluck Jonathan at his residence in Abuja triggered a stir in the major political camps, resulting in at least four possible theories..Air Task Force hits    Air Task Force hits