•Driver named, handed over to police 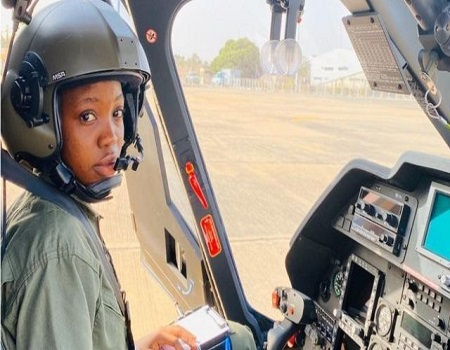 DETAILS of the last six hours of the late first combat helicopter pilot, Tolulope Arotile have been released by the Nigerian Air Force. The details were contained in a preliminary investigation report released by NAF’s Director of Public  Relations and Information, Ibikunle Daramola, on Sunday.

Circumstances leading to Arotile’s death, confirmed at the 461 NAF hospital at about 4.45 pm, began when she received a phone call from her colleague, Flying Officer Perry Karimo, at about 10.55 am, who requested that she comes to the  NAF base for them to work out modalities for their return to Enugu.

Arotile was with her elder sister, Mrs Damilola Adegboye, at Sabo area of Kaduna, where she stayed awaiting deployment to her next assignment, having only recently completed her promotion examinations. After the call from  Mario, the late Arotile had at about 10.58 am placed a call through to Squadron Leader, Diepiriye Batubo, to clarify issues regarding her deployment.

After the two phone calls, Arotile was conveyed from Sabo to the Nigerian Air Force Base, Kaduna, by her elder sister, where the deceased dropped her phone for charging at a house in the Instructor Pilots’ Quarters belonging to Squadron  Leader Alfa Ekele.

Arotile’s elder sister, Mrs Adegboye, at about 4 pm, dropped the deceased at the NAF Base Mammy Market for her to photocopy and laminate some documents. According to the investigative report, it was when Arotile was returning from  Mammy market at about 4.30 pm that three of her former schoolmates at the Air Force Secondary School (now Air  Force Comprehensive School), Kaduna drove past her.

One of the former schoolmates, Mr Nehemiah Adejoh, drove the vehicle which also had Mr Igbekele Folorunsho and Mr  Festus Gbayegun as occupants. As contained in the findings, Arotile’s schoolmates, who live outside NAF base,  Kaduna, were said to be on their way to visit the wife of a squadron leader, who lives at Ekagbo quarters on the base,  when they recognised their schoolmate, Arotile, after passing her.

After passing Arotile, the driver of the vehicle, Adejoh, was said to have reversed the vehicle to quickly meet up with her the deceased who was walking in the opposite direction, knocking down with significant force and causing her to hit her head on the pavement.

Subsequently, the vehicle was said to have run over Arotile’s body as it veered off the road beyond the kerb and onto the pavement, causing her further injuries. Nigerian Air Force stated that Arotile’s death occurred from being hit from the rear by the vehicle occupied by her three former schoolmates.

NAF stressed that the death of Arotile was caused by “blunt force trauma to the head and  significant bleeding resulting from being struck by the vehicle.”  Authorities of the Air Force stated that Adejoh, the driver of the vehicle that hit profile, did not have a valid driver’s licence.

The report, however, pointed out that going by toxicology tests conducted at the 461 NAF hospital, the driver was not drunk as feared in some quarters. NAF stated that no traces of alcohol or psychotropic substances were found in the system of Adejoh and others in the vehicle that also had Igbekele Folorunsho and Festus Gbayegun as occupants.

Furthermore, the NAF berated insinuations in some sections of the public of foul play by the Air Force in the death of Arotile.  It described as ludicrous insinuations of malevolent intent on the part of the service, noting that the Air Force had invested massive resources in Arotile to want to lose one of its prized assets.

This is as it decried attempts to politicise her death, urging those Nigerians to respect the sensibilities of families,  friends and her NAF colleagues who are still mourning the loss. Describing the case as a civil one, the Nigerian Air Force said the Nigerian Police would be taking up further investigation of the case and charging the suspects to the court.

NAF statement read in parts, “On July 14, at about 10.55 a.m., Late Flying Officer Arotile received a phone call from her colleague, Flying Officer Perry Karimo, a fellow helicopter pilot from the 405 HCTG, who wanted to discuss arrangements for their return to Enugu, requesting that she come to the base so that they could work out the modalities.

“Subsequently, at about 10.58 a.m., the late Arotile placed a call through to Squadron Leader Diepiriye Batubo,  the group  Operations Officer (GOO) of 405 HCTG, who was in Minna at the time, to clarify issues regarding her deployment.

“It must be highlighted that the call from Flying Officer Karimo, as well as the one to the Squadron Leader Batubo both  took place before 11.00am, over five hours before the incident which led to her death. “Flying Officer Arotile was  later conveyed from Sabo to the NAF Base Kaduna by her sister, Mrs Adegboye, where the deceased dropped her phone for charging at a house in the Instructor Pilots’ Quarters belonging to Squadron Leader Alfa Ekele. Her elder sister later dropped her off at the Base Mammy Market at about 4.00 p.m., where she proceeded to photocopy and laminate some documents.

“It was while she was returning from the Mammy Market at about 4.30 p.m. that three of her former schoolmates at the  Air Force Secondary School (now Air Force Comprehensive School) Kaduna; Mr Nehemiah Adejoh, Mr Igbekele  Folorunsho and Mr Festus Gbayegun, drove past her in a Kia Sorento SUV, with Registration Number AZ 478 MKA. It is noteworthy that Messrs Adejoh, Folorunsho and Gbayegun are all civilians who live outside NAF Base, Kaduna, but were on their way to visit one Mrs Chioma Ugwu, wife of Squadron Leader Chukwuemeka Ugwu, who lives at Ekagbo  Quarters on the Base.

“Upon recognising their schoolmate, Arotile, after passing her, Mr Adejoh, who was driving, reversed the vehicle, ostensibly in an attempt to quickly meet up with the deceased, who was walking in the opposite direction. In the process, the vehicle struck Flying Officer Arotile from the rear, knocking her down with significant force and causing her to hit her head on the pavement.

The vehicle then ran over parts of her body as it veered off the road beyond the kerb and onto the pavement, causing her further injuries. “ Meanwhile, Lagos-based rights activist and legal practitioner, Ebun-Olu Adegboruwa  (SAN), has demanded that there should be a clear and independent probe into Arotile’s death, which has pushed the nation into national mourning amidst the COVID 19- pandemic, adding that an independent probe is necessary for the light emerging revelations.

According to him, the death is tragic, painful and gruesome and inconsistent stories emerging from the Nigerian Air  Force has not helped to douse the suspicion, adding that there is no need for a rushed burial. He stated that “the least we expect is a proper investigation, followed with a coroner’s the inquest, including an independent autopsy report. There is no  point in rushing to bury her in the light emerging revelations.”

Adegboruwa said certain questions must clearly be answered before the burial can take place and asked that answers be supplied to 10 major questions: “Who drove the car? Where did the accident happen? Where was Arotile going to? A  reversing car means it had passed her, so was she trekking? “Was she blindfolded not to see the reversing car to escape?

Were her legs tied? What kind of medical treatment did she receive? In which the hospital was she treated? Who called her  out from her rest after successful air combat on bandits and why are there inconsistent statements from the Nigerian  Air Force being released in bits and pieces?”  Adegboruwa queried.

COVID-19: Death May Rise Beyond 10,000 People If… —Experts
EXPERTS have said Nigerians should expect more coronavirus infections with attendant death may rise to hit the threshold of 10,000, even as the pandemic continues to ravage the country and other… Read Full Story
Ex-NASS Clerk, Sani-Omolori Fights Back •Moves To Stop Appointment Of New Management
ERSTWHILE Clerk of the National Assembly, Mr Mohammed Sani-Omolori has denied the allegation of ‘gross insubordination’ levelled against him by the National Assembly Service Commission (NASC) sequel to the directive issued to all the staff who have attained 35 years of service and 60 years of age to… Read Full Story
COVID-19: Lagosians Groan As Prices Of Foodstuffs, Rent Soar
RESIDENTS of Lagos State may have to devise ingenious means of grappling with the economic impacts of the COVID-19 pandemic as galloping inflation hits practically everything needed for daily survival in the state of excellence, especially prices of foodstuffs… Read Full Story
Share FacebookTwitterGoogle+ReddItWhatsAppPinterestEmail

Driver of vehicle that hit Tolulope Arotile, did not have valid driver’s licence ― Air Force