Ahead swearing-in, Supreme Court rulings put Oyebanji in a fix 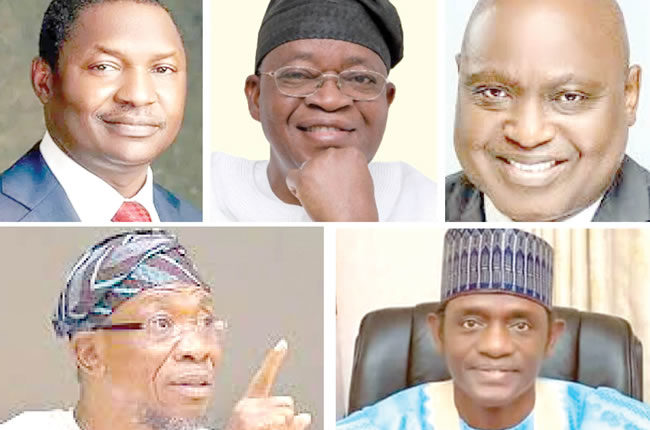 LANRE ADEWOLE writes on the burgeoning legal challenges for Ekiti Governor-elect, which aren’t of his making.

Oyebanji of the All Progressives Congress (APC) was declared the winner of the June 18, 2022 outlier election by the Independent National Electoral Commission (INEC), after scoring 187,057 votes to defeat his closest rival and candidate of the Social Democratic Party (SDP), Chief Segun Oni, who polled 82,211 votes.

Oni is now before the judiciary, not to challenge the figures credited to the contestants but to raise constitutional issues, rooted in Supreme Court precedents that could hurt Oyebanji and Afuye and secure the governor’s seat for Oni.

And it won’t be because of any faults of Oyebanji. In the case built against his victory by Oni, Oyebanji wasn’t the issue in any, yet the two dominant arguments in Oni’s appeal, are likely to succeed against the governor-elect, because they are rooted in cases already decided by the highest and final court in the land.

On February 13, 2020, less than 24 hours to the scheduled swearing in of David Lyon of the All Progressives Congress (APC) as governor of Bayelsa State, a full panel of the apex court unanimously voided his victory and awarded the governorship seat to Duoye Diri of the Peoples Democratic Party, who came a distant second in the November 16, 2019 election.

Lyon, who won over 70% of the popular vote cast in the election, lost his victory to the academic credential crisis of his running mate, Senator Biobarakuma Degi-Eremienyo. The apex court agreed with the trial court that the running mate gave false information in his CF 0001 form, about his academic certificates, submitted to INEC, which automatically, disqualifies him.

The lower court, headed by Justice Inyang Ekwo had on November 12, 2019 held that there was no connection between the name on the running mate’s school leaving certificate, first degree (BA), master’s degree and the affidavits he swore.

The bigger casualty was however Lyon. The apex court held that because he ran on a joint ticket with the one disqualified by the constitution, he too, would be deemed disqualified. Consequently, the duo, considered by law, not to have participated in the election they won, lost to the first runner-up, who was sworn in, the next day.

In the front-loaded case before the Tribunal, Oni and SDP are alleging that Afuye, the deputy governor-elect is in the same boat as Lyon’s running mate. The petitioners alleged that the Ordinary level certificate she submitted to INEC, which ensured her qualification to run with Oyebanji, is challenged. They are also alleging that just like Biobarakuma, she has two names that do not connect and that there was no known change of name, done by her.

The petitioners have also placed before the Tribunal a certificate, allegedly submitted to INEC by her, bearing the name of one Adegboye Monisade, while her full name, known to all, is allegedly Afuye Christiana Monisade.

Section 134(1)(a) of the Electoral Act and Section 173 of the 1999 Constitution, which dwell on qualification to seek office, were generously alluded to, by the petitioners. Clipped to their claim that Ms. Monisade wasn’t qualified to be on the ballot, is the Supreme Court pronouncement in Biobarakuma’s matter.

The petitioners are asking the Tribunal to toe precedent and disqualify Ms. Monisade, and by extension, Oyebanji, who took more than 53% of the popular vote. To make the justice of the matter rounded, Oni is asking that he should be declared the lawful winner of the poll, in which he took about 23% of the popular vote. He has lined up about 30 witnesses.

The Governor-elect appears not to be leaving anything to chance, despite his victory on the field, not being directly challenged. He has lined up 11 Senior Advocates of Nigeria, to defend his running mate amid other issues in the petition. The team is led by renowned election-litigation lawyer, Prince Lateef Fagbemi. The Silk and his team, had fired the first salvo by the way of preliminary objection to the two main pillars of Oni’s case.

Oyebanji’s legal team claimed that the certificate crisis surrounding the deputy governor-elect is a pre-election matter, which Oni’s team, wrongly brought before the Tribunal. Ruling has been reserved on who is right and who is wrong.

Fagbemi’s team, on paper, would appear to be right, considering that the Bayelsa matter, which Oni and SDP are relying on, flowed from the trial court, through the Court of Appeal, before landing at the Supreme Court. If the Tribunal in the final ruling, so decides, one of the two major legs of Oni’s case, is damaged.

Indications that the Fagbemi team is seeking to win at the preliminary stage, become clearer with the decision of the consortium of Silks, not to include Ms. Monisade as a witness in the entire Tribunal proceedings, despite the major accusation against her. Leaving her out, means she won’t be in the dock for any kind of interrogation. Though she can be subpoenaed by the Tribunal at the request of the petitioners, that window will be effectively shut from October 16, when she is expected to take office as the state deputy governor and be covered by the immunity, granted by Section 308 of the Nigerian constitution. Except she suffers Biobarakuma’s fate alongside her boss, Ms. Monisade, may not have to be in the dock for the next four years, to directly speak to the alleged discrepancies in her WAEC result.

However, beyond Monisade problem that Oyebanji has, he is also dealing with what has now become the Buni conundrum for the ruling All Progressives Congress.

Just like the three Justices of the Supreme Court in the minority ruling of July 28, 2021, Justice Emeka Nwite of the Federal High Court in Abuja, last Friday, declared as unconstitutional, the appointment of Yobe State Governor, Mai Mala Buni, as the acting national chairman of the APC, between June 25, 2020 and May 31, 2022.

All his actions, during that period, were also ruled null and void by Justice Nwite, invalidating in the process, the candidacy of outgoing Osun State governor, Gboyega Oyetola and his deputy, Benedict Alabi, whose nominations were signed by Buni. Though Oyetola lost his re-election, in the eye of the law, he is currently deemed not to have participated in the July 16, 2022 governorship election in the state. He has vowed an appeal.

In the Supreme Court judgement of July 28, 2021, referenced above, the apex court almost settled the vexed issue of Buni serving as the party chair as a sitting governor. Both jobs, are considered executive in nature and Section 183 of the Constitution of the Federal Republic of Nigeria and Section 82(3) of the Electoral Act 2022, forbid such combination. The seven-man panel agreed unanimously that there is something constitutionally wrong in Buni doing both jobs simultaneously, but could not agree on applying the sanctions without giving a decent hearing to the man at the centre of the controversy. So, they split. Four went with giving him the benefit of hearing his argument and since he wasn’t joined in the original suit, brought by Eyitayo Jegede, SAN, the candidate of the Peoples Democratic Party in the Ondo State governorship election of October 9, 2020, they decided not to punish Rotimi Akeredolu, the governor and APC’s candidate in the election, for it.

Akeredolu escaped by a whisker and he had to author a pungent letter to his party, demanding Buni’s removal, to curb further damage. The party, however, was adamant. Buni stayed on, and signed on the nominations of the party’s governorship candidates in Osun and Ekiti outlier elections.

In getting the trial court to disqualify Oyetola and his deputy, the Peoples Democratic Party had to join Buni, this time, as a necessary party, to avoid the Jegede pitfall. With PDP in all-clear of the Supreme Court majority decision hurdle, Justice Nwite was no longer tethered by the precedent and went ahead to apply the big stick against the Osun governor.

Oni and his team are adopting the PDP strategy as their playbook. In making the Buni conundrum the second major plank of their Oyebanji-Must-Go judicial challenge, the SDP candidate ensured that Buni was not only joined as a necessary party, the judgement of the Supreme Court, both majority and minority ruling, was packaged into his processes.

The majority judgement in Akeredolu Vs Jegede says a consequence as extreme as the removal of a governor from office, which the constitution prescribes for the alleged infraction of Buni, should not be undertaken without hearing from him. In the case before the Ekiti election Tribunal, Buni is at play, but he isn’t the target. Oni is asking that all Buni’s actions as APC’s acting chair, be nullified, including signing and forwarding Oyebanji’s nomination to INEC, as prescribed by the law.

Again, the legal team of the governor-elect has raised an objection to the Buni matter.

In the two major judicial pronouncements that had been issued over Buni’s interim headship of the ruling party, one had commenced as a pre-election matter which disqualified Oyetola and the other, on Ondo, flowed from an appeal brought by Jegede challenging Tribunal’s conclusion, through the Court of Appeal.

A peep into the legal team of Oyebanji, revealed that it is almost an wholesale adoption of the legal team that rescued Akeredolu from the jaws of defeat. If the team succeeds in getting the Tribunal to favour its preliminary objection that Buni and the deputy governor-elect, should not have been joined by Oni in the petition challenging Oyebanji’s victory, then, it would have succeeded in knocking the bottom off Oni’s case.

If Oni however succeeds in using any of the two scenarios above to get Oyebanji disqualified, his judicial victory, may not guarantee automatic return to power. There is a constitutional hurdle on spread.

Justice Ejembi Eko, now retired, who read the lead judgement, ordered INEC to issue certificates of return to candidates (governor and deputy governor) of the party with the next highest number of lawful votes and with the required constitutional geographical spread in the election.

Diri, with victory in just two local governments; Sagbama and Kolokuma/Opokuma and a paltry 143,172 votes, less than half of Lyon’s 352,552, somehow, managed to hit the constitutional threshold, to become governor.

In Ekiti, Oni, despite his perceived strong showing, coming second in the popular vote count, did not win a single local government. The only local government lost by Oyebanji out of the 16, Efon LGA, was to PDP’s Bisi Kolawole.

Section 134 of the 1999 Constitution compels that in a governorship contest, the winner must secure the highest number of votes cast and quarter of the votes cast in two-thirds of all the local government areas in the state.

It means apart from having the most lawful votes which he has, if Oyebanji is disqualified, Oni must also secure 25 percent of votes cast in about 11 LGAs in the election.

The constitutional mathematics is before him and his team, to solve.